Wounded Warriors at Play on the River

What if you could do something really great for veterans? 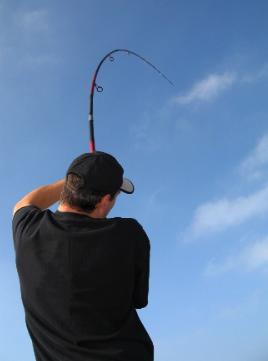 A love of the outdoors
“My passion is helping people enjoy the outdoors,” says Tom, a lifelong outdoorsman and certified Maine Guide. “So when I met the ‘wounded warriors’ of Huot House, we got to talking and I said, ‘What do you do for fun?’ They told me they had a garden out back. And I said, ‘No, man, I mean what do you do for real fun?’ And naturally we ended up talking about going fishing!”

Tom is also the owner of Classic Connections, a guide service; a noted television personality — having hosted Brotherhood Outdoors on the Sportsman Channel, Escape to the Wild on Versus, and New American Sportsman on ESPN; and a licensed Coast Guard pilot.

With a little help from friends
“The trouble was, I don’t own a boat anymore,” he says with a laugh. Tom’s a big, relaxed man who smiles easily. “So I emailed my skipper friends along the coast, looking for volunteers with boats — and got a lot of generous replies. We finally settled on Captain Chester ‘Skid’ Rowe, a great guy who runs fishing charters on the Kennebec River.”

The result? Four resident veterans from Huot House sailed with Captain Rowe on his 24-foot pontoon boat from Bath to Morse Cove in Phippsburg to fish for striped bass. The residents reported they had a great time on the water and enjoyed the captain’s wide-ranging stories about the river’s history and lore — even though the day’s fishing wasn’t at its finest. “No,” says Tom, “this wasn’t a top year on the river, I’m afraid. But you know what fishermen say — ‘When we go fishing, it’s not really fish we’re after.’”

Making a difference
Volunteers of America salutes Tom Ackerman and Captain Rowe for their generosity in support of Maine veterans. To learn more about Tom’s Classic Connections guided fishing and hunting expeditions, visit the website or contact Tom at 888-729-8645. To learn more about Captain Rowe’s charter service, visit: www.captskid.com or contact Captain Chester at 800-472-2036.

“This was a simple, genuine opportunity for me to give a little something back,” says Tom, “and I was glad to do it. Also, my son was a combat pilot in Iraq and Afghanistan. So that played a role, too. For me, the outdoors is unique — there’s the challenge of it, sometimes the trophy, and the beauty of it, as a place of healing and hope. It’s like therapy, and it changes your outlook. For the better.”