Why complain when you can do something? 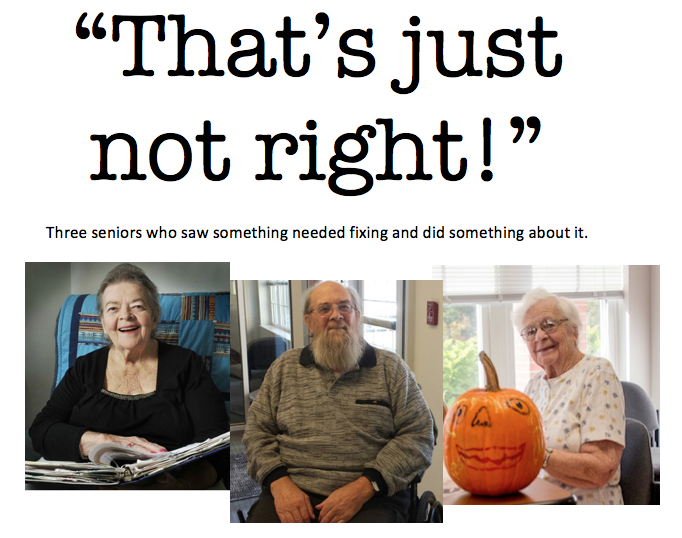 There is a lot going on in the world that a person could complain about if she or he were the complaining type. Instead of complaining, these three seniors are doing their part to make the world brighter for others.

Joan Sheedy, longtime resident of Volunteers of America's Bayview Heights in Portland, is pictured on the left (photograph by John Ewing) with a scrapbook of articles, letters and awards she has collected over the 10 years she has been overseeing her Senior Snow-shoveling Project. The Project, founded in 2004 by Sheedy, provides free snow removal to Portland seniors and people with physical challenges. When she learned that the city of Portland fines homeowners $110 if they fail to clear snow from their sidewalks within 24 hours of a storm, she took action.

"I thought that was just mean!" said Sheedy. "All I could picture was some poor woman who'd just lost her husband having to search for a shovel down in her basement and clear all that heavy snow from her sidewalk." 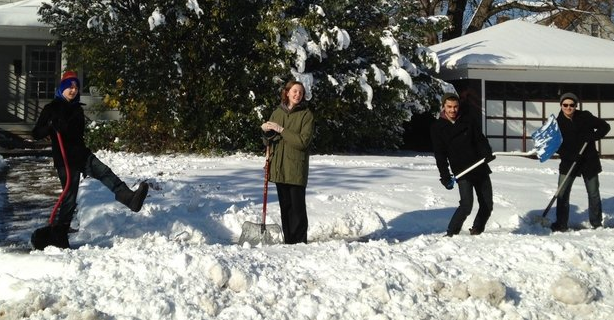 Sheedy got student volunteers from five Portland-area high schools to shovel the steps and walkways of senior residents. Shovelers clear a path from the front door to the sidewalk as well as the sidewalk section immediately in front of the property following each snow event.

Her efforts caught the attention of the National Association of Triads Inc., which partners law enforcement officials, seniors and area organizations to proactively address safety concerns among older residents. Triad officials asked Sheedy to formulate a plan for the shoveling project that has since been implemented nationwide.

Ben Nye (above, middle) is a relative newcomer to Volunteers of America's Margaret Chase Smith House in Augusta. He moves around in a wheelchair that he pulls, pushes and steers with his feet and sometimes his arms. He can stand up and walk without the chair for short periods of time, but his body can no longer do the work to hold him up for long.

After a life of cutting and hauling wood, farm work, and a stint in the Army, Ben moved to his family home, took to drinking and could no longer work. His sister found him in bad shape one day and called an ambulance. They took him to Togus and he was admitted immediately into Hospice. 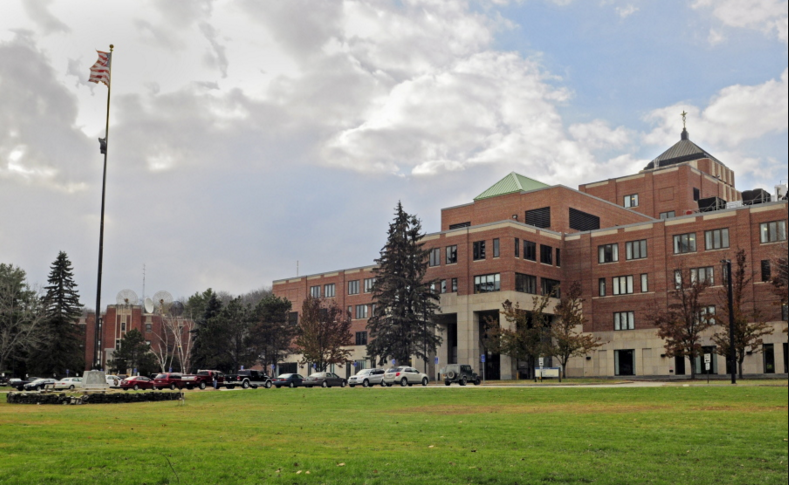 Five to ten percent of patients who go into Hospice actually leave the program in better health. "Graduates" they are called, and Ben is one of them. He spent 10 months in Hospice where he quit drinking and his health steadily improved. It was time to find a new home.

A Hospice volunteer told Ben "wonderful things" he had heard about Margaret Chase Smith House (MCSH) in Augusta and they went for a visit. "I looked at a lot of places to live and when I saw this place, I knew it was my new home." With help from Hospice, MCSH's Resident Services Coordinator Carmen Daigle, and neighbors, Ben settled into his apartment in July 2015. Carmen helped get him set up with senior benefits and into the Buddy System and he began his new, "independent" life. 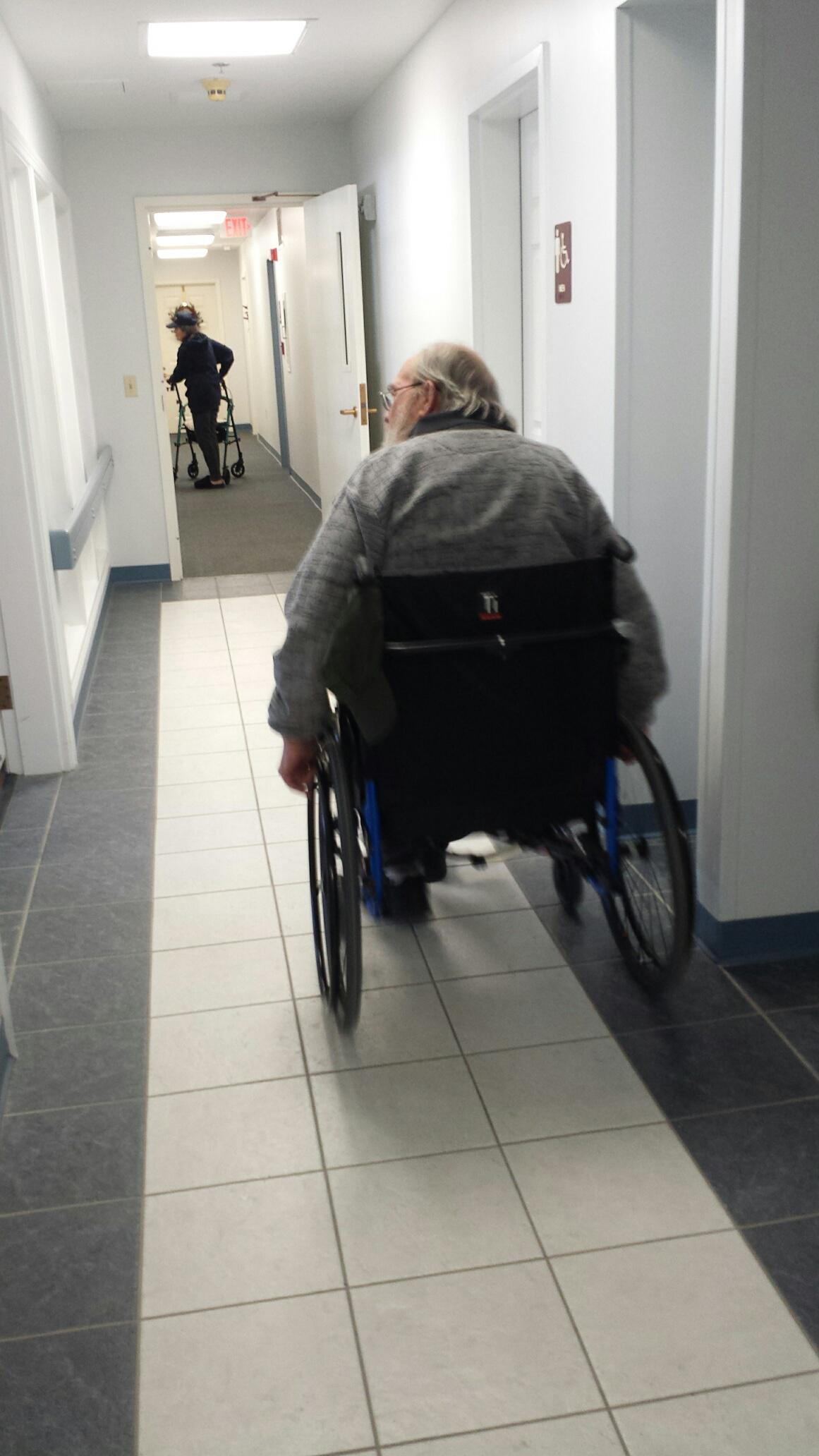 Ben rides the bus to Togus every week to volunteer and visit with Hospice patients. His job, he says, is to make people laugh in the midst of a hard life and sad stories.

"You know when a veteran dies (at Togus), you see them pushing a gurney covered with an American flag through the halls. One day I decided to get up out of my (wheel)chair and stand up to salute. Pretty soon everyone was doing it and those guys now get a proper send-off, the halls lined with everyone standing at attention and saluting." He is rightfully proud of the tradition he has started. "Somebody put me on a path so I'm going to follow it through."

Iona Osnoe celebrates her 95th birthday this year and is throwing herself a party at Volunteers of America's Westrum House in Topsham where she resides. A Maine native, Iona was born in Brunswick and raised on her parents' farm on the Highland Road. She is also a veteran of the U.S. armed forces and has been a tireless volunteer for a variety of programs sponsored by Volunteers of America.

"My father kept dairy cattle for butter and milk," she says, "and my mother took care of chickens, for eggs." 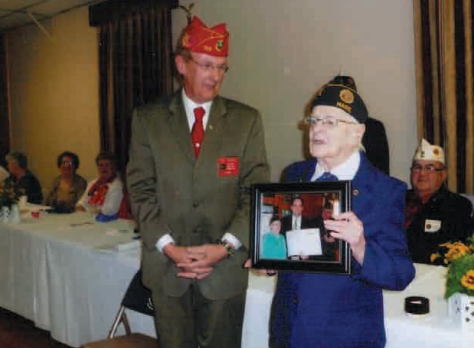 During World War II, Iona enlisted and served as a private in Norfolk, Virginia, in the Aircraft Warning Service. "This was before the days of radar," she explains.

The service maintained a network of aircraft-spotting towers along the coast (many of which can still be seen to this day) to determine whether aircraft spotted overhead were friends or foe.

After her discharge, in 1943, Iona worked at a variety of jobs, including Hyde Windlass (which later became a part of Bath Iron Works) in Bath, Maine, turning gears on lathes for the engines of PT boats — alongside her sister, who helped assemble the engines.

"I enjoyed that job," Iona says. "I often wondered if one of my gears was in John F. Kennedy's famous PT-109."

Iona joined the American Legion in 1945. She is pictured above, three years ago, receiving recognition from the Maine legislature for 65 years in the Legion. She married Leonard Osnoe and they had seven children, three of whom live in Maine today.

In recent years, Iona has volunteered in many of Volunteers of America's programs, including preparing and serving meals at Camp POSTCARD and helping out with the Midcoast CA$H Coalition. She is also on the WII Bowling team which made it to the National semi-finals last year.

This year, on Leap Year Day, Iona is cooking a benefit pancake breakfast to raise money for our Cabins in the Woods programs. "Everyone here knows a veteran or has a veteran in their family," she says, "Veterans are getting a bad deal and they need help."

It doesn't occur to any of these three to sit around and complain...or to brag. They work quietly at making things right for others. And if you have a few minutes and happen catch them relaxing, they will tell you their stories.

To read more about each of them, follow these links: Joan Sheedy, Ben Nye, Iona Osnoe