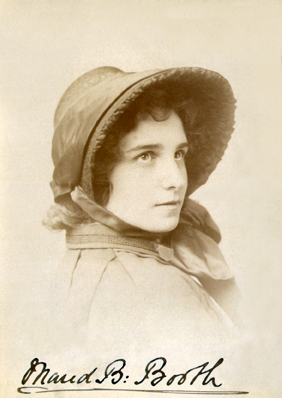 April 11th, 1896, the Volunteers began publication of The Gazette, the Volunteers of America magazine for friends and supporters. In the very first issue, there was something for everyone: an article on "How Bananas Grow" for child readers, reports on Volunteers of America meetings and projects, and a group of songs including a hymn, "Jesus Is Mighty to Save," written by Ballington Booth – one of the many hymns he would write over the years for the movement. Maud had two contributions: a column for Women Warriors and a full-page article on the topic of "What Volunteers Can Do for Men in Prison." This was a glimpse into her future. But little did she know how great a role her efforts in the field of prison reform would play in Volunteers of America.

It was important to Maud to have a meaningful project of her own. The "slum sisters" had been her major concern for many years but that had come to an end since she had no intention of trespassing on this traditional Salvation Army undertaking. Prison work was a minor part of The Salvation Army's agenda so she would not be poaching on their territory. She remembered her sense of satisfaction when she had spoken with great success to the prisoners of San Quentin. But was this to be her important project? She prayed for God to give her a sign. The answer to her prayer came with a letter that arrived in early May of 1896. It came from a prisoner at Sing Sing who had met her when she worked in the New York City slums. His concern was not for himself but for his wife and her wellbeing while he was in prison. Most interestingly, on the letter's envelope was a message from Sing Sing's warden, Omar V. Sage. The warden of San Quentin had told him of Mrs. Booth's influence and inspiration on prisoners, and he asked if she would speak to his Sing Sing prisoners.

This was the sign she had been waiting for. The need was great. At this point in time, the prison system had no parole system to help men newly released from prison. They had served their time in small, dark, damp cells with no plumbing. Few of them had help or support to ease their way back. Their "prison pallor" and rotting teeth were indications of the lack of care that society had for them. It was a momentous occasion when Maud Booth accepted the warden's invitation. She stood up in Sing Sing's gloomy old chapel on Sunday, May 24th, 1896. Eight hundred men crowded into the auditorium, singing hymns while Maud and her little party of Volunteers filed in. In the next issue of The Gazette, Mrs. Booth wrote about this experience. "…I thought how I should feel if I was in their place…..I realized what they needed from my lips was something that would carry their thoughts away beyond the gray walls, and some message of Christ's dear heart of love." She offered them that message. When she finished she asked for those who were willing to stand up for God. The few who stood up were laughed at by the others, but gradually more and more joined in. At the end of this day, fifty prisoners had become the first group of inmates who glimpsed a possible future through Maud Booth and the Volunteers of America.

The response to her Sing Sing appearance was rewarding. Letters came across her desk from the men who had been present. She invited them to write and they did. She promised to answer each letter personally and she did. She returned, not only to speak publicly, but to visit those in their cells who had written her. On her second visit, they organized the Volunteer Prison League (VPL). The first sixty members agreed to pray, to read the Day Book (a collection of scripture verses for each day of the year), to refrain from using bad language, to follow the prison rules, and to cheer and encourage other prisoners and when possible to make them members of the league. The prisoners chose "Look Up and Hope" as their name and as their motto. Plans were made for the preparation of a group of residences to house former prisoners. Each residence would be known as "Hope Hall."

Sing Sing was just the beginning. Other prisoners and other prison officials invited Maud to come to their institutions and organize more VPLs. In the fall of 1896 she visited prisons in Auburn (New York), Charlestown (Massachusetts), and Dannemora (New York). There, three new VPL chapters were begun. Dannemora was a special challenge. This was a prison for the "third-time losers," the habitual criminals branded as hopeless. Even the warden told her not to bother – that the men were past redemption. But the warden was wrong. After she spoke, 87 hardened criminals stood up to ask God to help them start a new life.

When she left Dannemora she carried with her donations. Prison officers gave a total of $55. Another $100 came from the prisoners themselves. This money came from the few cents a day that prisoners were paid for full-time work. These earnings provided them with the only resource they had to purchase tobacco, writing paper and stamps, or any little thing they needed. That $100 represented a genuine sacrifice. But the hope it gave them was worth it. These donations were intended to help her start the first "Hope Hall," a refuge for newly released prisoners. After the first Hope Hall, others were established in San Francisco, Chicago, Fort Dodge (Iowa), Columbus (Ohio), New Orleans, Waco (Texas), Walla Walla (Washington), and Hampton (Florida).

The for a Hope Hall was non- institutional. They were large houses with many bedrooms, living rooms with a welcoming air and nothing about them reminiscent of prison. The men were to help with the housekeeping and the cooking. Maud wanted a Hope Hall to be a recuperative setting to prepare the former prisoners for success in the outside world. For men in prison, holidays were the loneliest and saddest times. Maud recognized this. She often gave up her own holidays to bring some joy to the prisoners. She spent the Christmas of 1896 visiting cell after cell in Sing Sing. The following Easter, when Maud planned a visit to Dannemora, her four- year-old daughter Theodora begged to go with her. One of the highlights of that visit was a hymn sung by the little girl for the men her mother called her "boys." To Maud, the prisoners had become her boys and to them she was "Little Mother."

The Little Mother did not forget the families of her boys. Many were destitute. She sent them food and clothing, and arranged temporary shelter. She also dedicated herself to make Christmas for the families. Little ones were given new shoes and clothes for school. Girls who had never had a doll were given one to cuddle. And donated food provided a Christmas feast for lonely and impoverished families. Prisoners rejoiced when their families reported the happy Christmas that the Volunteers made possible. They learned that if they wrote Little Mother about their families' needs, she would help as much as she could.

In her first year of working with prisoners, she inaugurated VPLs in seven state prisons. Next, she added Folsom (California), Columbus (Ohio), Fort Leavenworth

(Kansas), Carson City (Colorado), Anamosa (Iowa), and Baltimore (Maryland). The VPL was strong in each of these. Initial meetings followed in Lansing (Kansas), Jackson (Michigan), Fort Madison (Iowa), and Wethersfield (Connecticut). In the first seven years of the Volunteer Prison League, 14,000 men joined. By 1912, more than 60,000 men were VPL members in twenty-eight state prisons, and 7,500 had graduated from the four Hope Houses. These prison endeavors expanded as rapidly as possible with only the need for funding holding them back. The success of the VPL was a point of pride. VPL members regarded Volunteers of America as their "first friend." From sixty to seventy-five percent of the VPL prisoners succeeded

This is in extraordinary contrast to prison data in general. Usually, sixty to seventy-five percent of prisoners were repeat offenders and ended up back behind bars. When the Volunteers instituted programs enabling former prisoners to find jobs and housing, this was the start of a greater and more far-reaching mission. In the future, help and comfort would be offered by the Volunteers, not only to prisoners, but to a wider group of people with needs – homeless, destitute addicts, the disabled, abused women and children, and families devastated by floods and fires.

In 1935, Ballington's health began failing and Maud took on many of his duties. Then, on October 5, 1940, in his eighty-third year, Ballington died, and Maud became the General of the Volunteers of America. This was a position she had never coveted, but she knew her husband would have wanted her to take on the responsibility. In addition she continued to travel and lecture, and whenever possible, she spent her Sundays visiting a prison. Wherever she went she was approached by former prisoners whose lives had been helped by her.

In August 1948 – three weeks short of her eighty-third birthday, Maud Booth died and was buried beside her husband and partner with whom she had shared a long and meaningful life.

Maud and Ballington Booth have been memorialized with a plaque in the The Extra Mile — Points of Light Volunteer Pathway located on the sidewalks of downtown Washington, D.C. The Extra Mile is a program of Points of Light Institute, dedicated to inspire, mobilize and equip individuals to volunteer and serve. The Extra Mile was approved by Congress and the District of Columbia. It is funded entirely by private sources.