The Making of a Leader 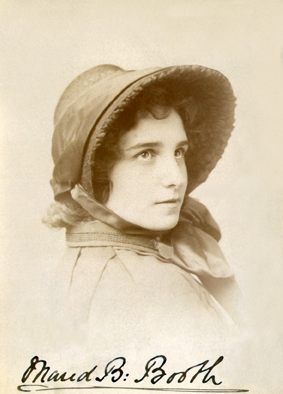 In 1882, when she was 17, Maud Elizabeth Charlesworth was speaking to crowds as a devout member of the Salvation Army. She was sent to Geneva as an aide to Catherine Booth (Ballington's sister) to carry the Army's message of God's love through service into Switzerland.

They were joined by Josephine Elizabeth Butler, a British feminist and social reformer who was especially concerned with the welfare of "white slaves" (young women who were entrapped and exploited for factory work and prostitution). Josephine was intensely religious as a non-denominational evangelical Christian and crowds gathered by the hundreds and sometimes thousands to hear her speak.

As more people joined the Army, these three women became a major threat to the structure of power in Switzerland.

Young Maud writes, "The fair city (of Geneva) was in the hands of a very corrupt political ring. The Chief of Police was hand in glove with the saloons and white slave traf­fic...The next morning before we were up, two big, formidable police officers were at the door of our quarters with a warrant for my arrest. I had to dress hurriedly and go with them, and they allowed me no breakfast. We must have looked foolish, even to the passersby: a short, slim, slip of a girl of seventeen, who could not look like a criminal by any stretch of the imagination, being marshalled through the streets by those husky officers of the law. At their office, they gave me a third-degree examination that lasted from early morning until late at night, with no food for me and not one of our friends or fellow-workers allowed to come near me."

She was released the next day and believed that the police had made their point and would leave her alone, but in the middle of the following night, they returned to her quarters.

"I only had time to pack a handbag, and then with my police escort, I was driven off to some unmentioned point across the border in France. I shed no tears. My fighting blood was up. Crowds in the street waved goodbye and jeered at the police. On the road outside the city, a group of our dear people sang hymns and waved to me as I passed. The spirit of one of my Hugenot ancestors whispered encouragement, so I really enjoyed that drive tremendously. At last, we passed out of the canton, over a stream and away from the jurisdiction of the authorities. The police, having driven me so far against my will, might have been kind enough to take me a little farther to a hotel. But no! They were too mad at the whole situation. They dumped me by the roadside, turned their horses and galloped back to Geneva. I picked up my little bag and trudged in the other direction, not knowing where I was."

The experience had the opposite affect than the police were hoping for: her convictions were strengthened. As she put it, "Apart from my joy at the glorious work being accomplished, I was also thrilled by the excitement of the police persecution."

--taken from A Rector's Daughter in Victorian England: Memories of a Childhood and Girlhood by Maud Ballington Booth, copyright 1994