They've Got a Way with Kids...and Vegetables.

The Dynamic Duo of the Camp Kitchen 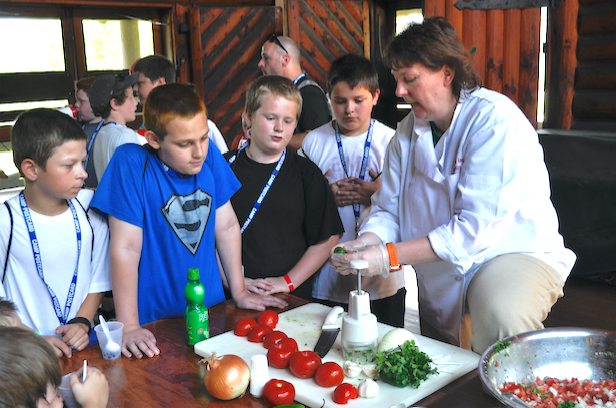 For most of the year, they maintain their alter egos as Volunteers of America Northern New England's Housing Manager and Manager of the Intensive Residential Treatment Program South...

...but for 9 days each June, Julie Dufour and Don Cray pull from their culinary backgrounds, put on their aprons and become the Super Heroes of the Camp POSTCARD kitchen. 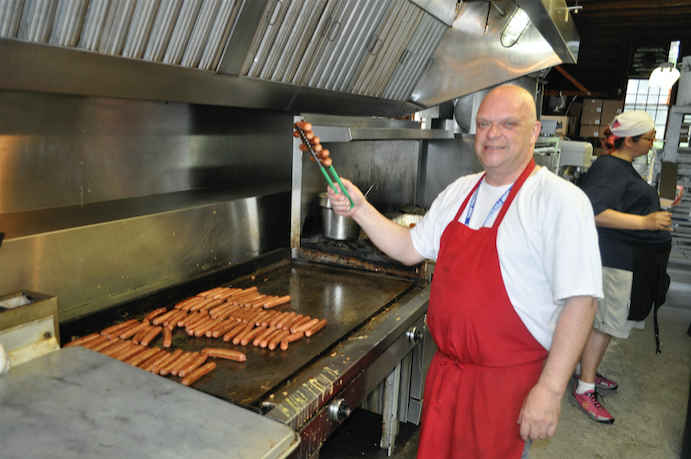 Julie Dufour has a Masters degree in Recreational Therapy and was leading expeditions with teenagers in residential treatment when she decided to go to culinary school. Soon she was, as she says "cooking for the rich and famous….and the infamous." Among other clients, she catered for the Rockefellers, the Prince and Princess of Japan, and movie stars like Tom Hanks. Catering led to working for a large food manufacturer, designing and selling meals for the airline industry and Meals on Wheels. At the same time, she was teaching culinary arts and the science of food preparation at the local community college and University of Maine. 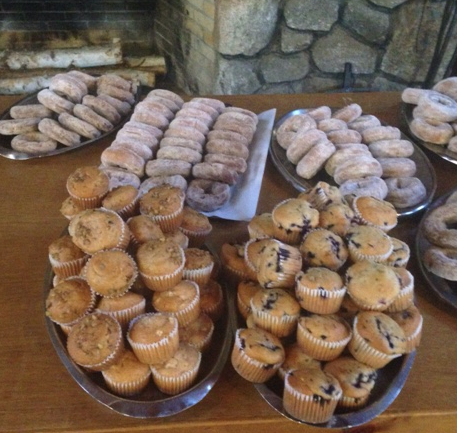 Julie loved the work but the 70+ hours a week and constant travel was keeping her from the enjoying the best parts of cooking. That's when she saw an ad for a cook at the Women's Reentry Program and came to work for Volunteers of America. "I instantly felt a sense of purpose," Julie said of that time. "I was in the kitchen again and got to teach residents how to cook. We even created a cookbook of all of our recipes that the residents would take with them as they left the program."

When the Reentry Center closed, Julie transferred to Miller Square on Harlow Senior Housing where she works as a housing manager. She continued to teach culinary arts, now to the residents of the Maine Coastal Regional Reentry Center in Belfast. It was there that she was asked if she could help out at Camp POSTCARD for a day. They needed someone to help "knock out the desserts."

She smiles, "It was hot, it was raining, the cooks were cranking out the food, and I was back in the kitchen. I was happy and I was hooked on Camp." The following year she went for the whole week, teamed up with Don Cray and the rest is Camp history. 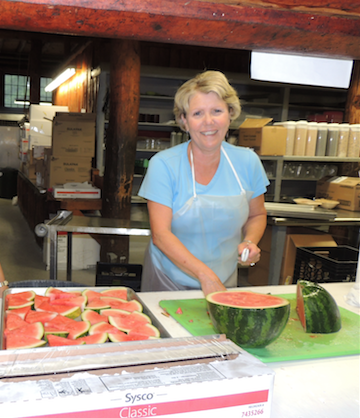 Don attended culinary school and then entered the work force in retail and computer sales before coming to Volunteers of America as a Residential Counselor. He wanted to make a difference. Don now works as the Program Manager for Intensive Residential Treatment (IRT) South.

Because of his culinary background, Don was asked to help in the Camp kitchen. 2016 will be his 4th year in the kitchen. "What makes me keep coming back is the smiles I see on the 5th and 6th graders' faces." He says, "They are so happy to be at camp for a week. Working in the kitchen is so much fun. Laughing and joking. It's very rewarding. I can't imagine not going to camp."

"Don is a phenomenal front of the House, happy smiling face in the window that makes everyone feel important, and that allows me to be in the back working with the volunteers that may have never worked in a kitchen before." Julie says, "They learn pretty quickly what needs to be done and we couldn't do it without them. Everything in the kitchen is supersized. Huge hot ovens, pots and pans so large it takes two people to lift them off the stove. There's a lot going on and it's pretty fast paced and we have to watch out for each other." 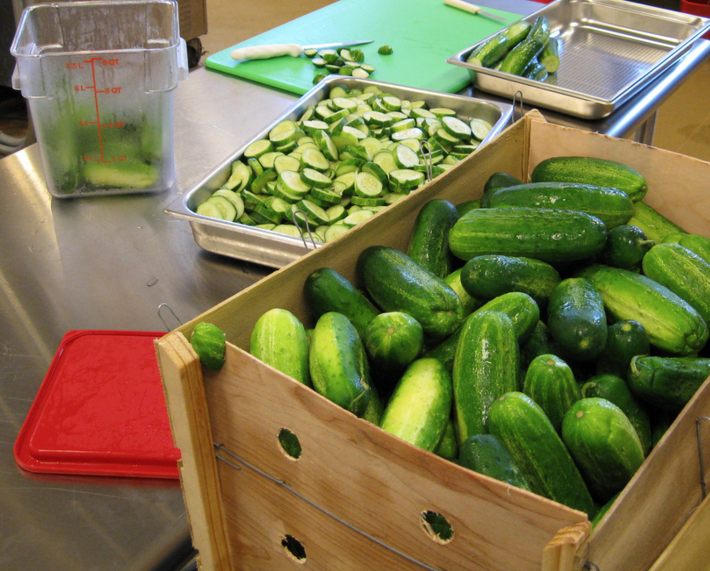 Spending even just an hour in the kitchen peeling potatoes or cutting carrots with these two, you can tell they have tremendous respect for each other, even as they laugh and tease. And sometimes they break into song.

Their camp kitchen week starts Thursday, a day before the leaders arrive, at about 9:30 in the morning as they receive the food deliveries and donations for a week's worth of cooking.

On Friday, they start to prep the food for the upcoming meals. Saturday starts off with a kickoff breakfast for the leaders and then it's a 6am to 6pm schedule until the campers leave.

It takes a lot of volunteer help and donations to keep the kitchen running. A week's worth of 2700 desserts and 1200 donuts are donated from Old Town's Labree's Bakery. McCain of Aroostook County donates french fries. Among a hundred other things consumed through the week, the 150 campers and 100 active staff eat 2400 pancakes, 800 muffins, 1200 taco shells, 900 hamburger buns, 240 pounds of scrambled eggs, 100 bottles of ketchup, 200 pounds of pasta, 800 hot dogs, 200 pounds of chicken, and hundreds of pounds of fruits and vegetables. 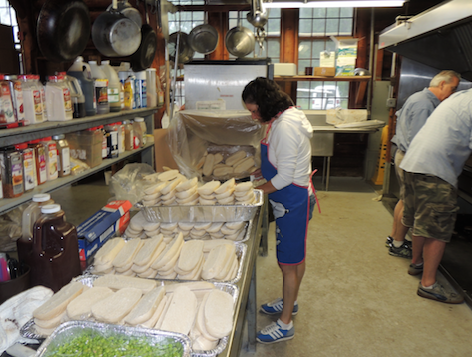 Campers and leaders come in from their activities ravenous. Our motto is "Take all you want, but eat all you take." To make sure there is enough, Julie and Don make 300 portions of everything for each meal and rarely have much leftover."We try to get as much food donated as possible and are always looking for companies and individuals to help us," Julie said, "The various law departments from around the state do a fabulous job of collecting local food and making donations. It takes many, many people and companies to make camp possible." 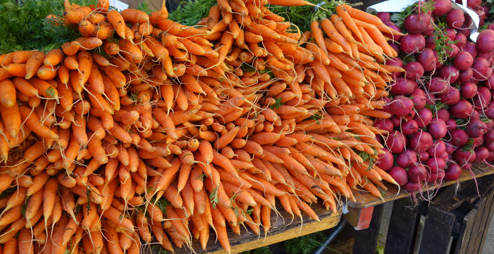 believe that they were disappearing. "I walked out into the dining room to see who was eating all the pancakes when this thin shy girl approached and asked if I made the pancakes. When I told her I did, she gave me this huge smile and said, 'Thank you so much. They were so good I ate 9 of them.' This is why I keep coming back. This makes all the hours in the kitchen worthwhile."

They work hard to have something for everyone, even picky eaters or campers and leaders with food allergies and intolerances. And they do it right up to their ride home on their last day when they leave with a bagged lunch made by VOA kitchen volunteers. 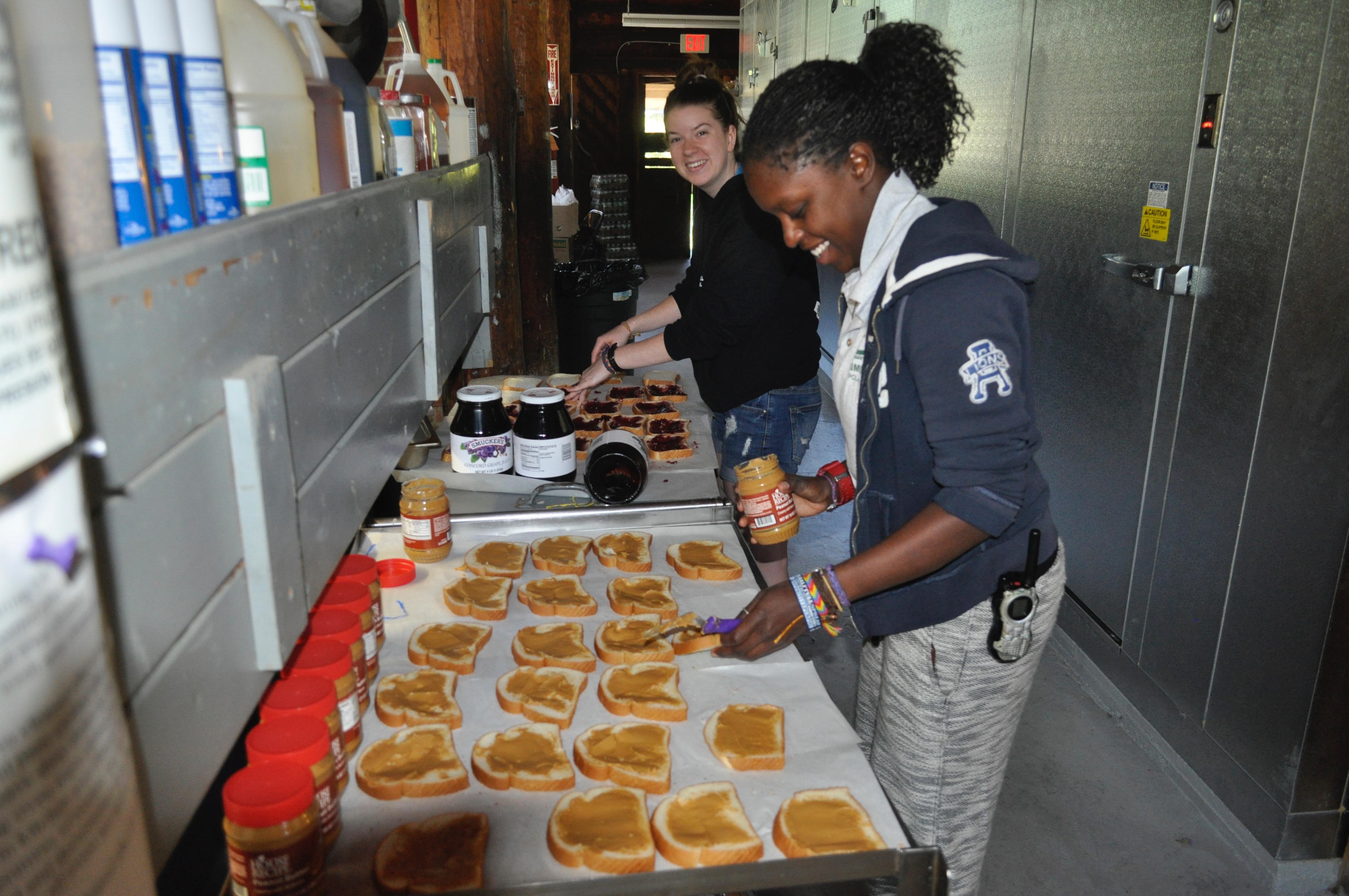 After 9 straight days in the kitchen, Julie and Don go home, order take-out, and sleep for a whole day. Then it's back to their year 'round jobs, Julie in Bangor and Don in Biddeford.

And not too long after they have settled back into their alter ego roles as managers, it's time to start planning for next year.