Our Founders, Our History

Maud was a fearless champion of Womens' Rights 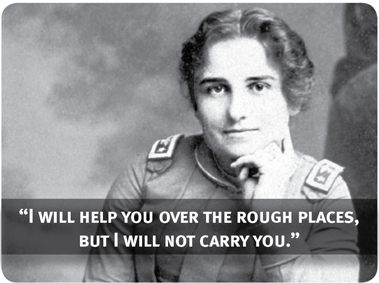 In 1882, when she was 17, Maud Elizabeth Charlesworth was speaking to crowds in Geneva on behalf of "White Slaves," young women entrapped and exploited for factory work and prostitution, when she was arrested. (read the whole story here)

"Apart from my joy at the glorious work being accomplished, I was also thrilled by the excitement of the police persecution." A short while later, she met Ballington Booth.

He was the tall, handsome son of the controversial founder of the Salvation Army. She was the petite, refined daughter of a proper Anglican rector. Her father forbade them to marry, and his father performed the ceremony. From the start, Maud and Ballington Booth were bound for a special destiny, one that culminated in 1896 with the founding of Volunteers of America. It's mission, "To reach and uplift all people and bring them to the immediate knowledge and active service of God." They pledged to "Go wherever we are needed and do whatever comes to hand." read their extended story here

Today, through hundreds of human service programs, including housing and health care, Volunteers of America helps more than 2 million people in more than 400 communities. Since 1896, our ministry of service has supported and empowered America's most vulnerable groups, including veterans, seniors, people with disabilities, at-risk youth, men and women returning from prison, homeless individuals and families, those recovering from addictions and many others. Our work touches the mind, body, heart – and ultimately the spirit – of those we serve, integrating our deep compassion with highly effective programs and services. And if you want more details, here is last year's 120 Anniversary Founders' Day story