From Living in a car to a day at the White House!

The Ties That Gently Bind Us 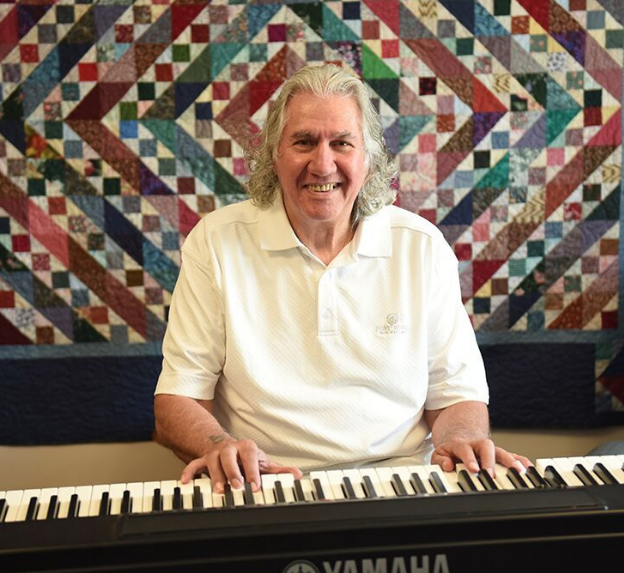 This is the story of Bill Marinelli, an incredible musician and Vietnam Era Veteran born in the 1940s, who lost his home and came to live at Volunteers of America's Huot House in Saco.

This is also the story of a Steinway Baby Grand piano, built in the 1940s, whose family relocated to a smaller house, and found its new home at Volunteers of America's Paul Hazelton House, less than two miles from Huot House.

The piano's story begins with Doug Stebbins, whose son inherited the Steinway. He is Thornton Academy's Events Coordinator and works with Mary Ann Martin, T.A.'s Action Team leader. Students can often be found visiting residents and helping out at Paul Hazelton (less than a five-minute walk from their Saco campus) and Paul Hazelton House residents often attend events at Thornton Academy.

When Doug needed to find a home for his family's Steinway, Paul Hazelton seemed a perfect fit, and the beautiful baby grand was moved ("on extended loan") to a quiet corner of the Community Room.

Around the same time, Bill Marinelli, homeless for the first time in his life, had put his instruments in storage and was living in his car, blind with cataracts, through one of the the worse winters on record. A friend found him one day and told him, "Veterans do not live in their cars."

"Veterans do not live in their cars."

His friend helped Bill move to a York County shelter where he met Volunteers of America's Veterans Services case managers Brian Buothot and Ken Darby. A short while later, Bill was moving into transitional housing at Huot House.

Once he got settled in at Huot House, Ken introduced Bill to Susan Whittington, V.A.'s Homeless Veterans Liaison and got him enrolled into the V.A. Maine Healthcare System. Soon, his cataracts were removed, his eyesight was restored and he could see again to read music.

When the folks at Paul Hazelton House discovered that a musician was living less than two miles away, they invited Bill to come and play the baby grand.

He plays whenever he can make the time. And when he sits at the keyboard, the world changes. While he seems to be able to play any request, however obscure, Bill also makes his own path into music with lovely improv of gentle harmonies and evocative melody. 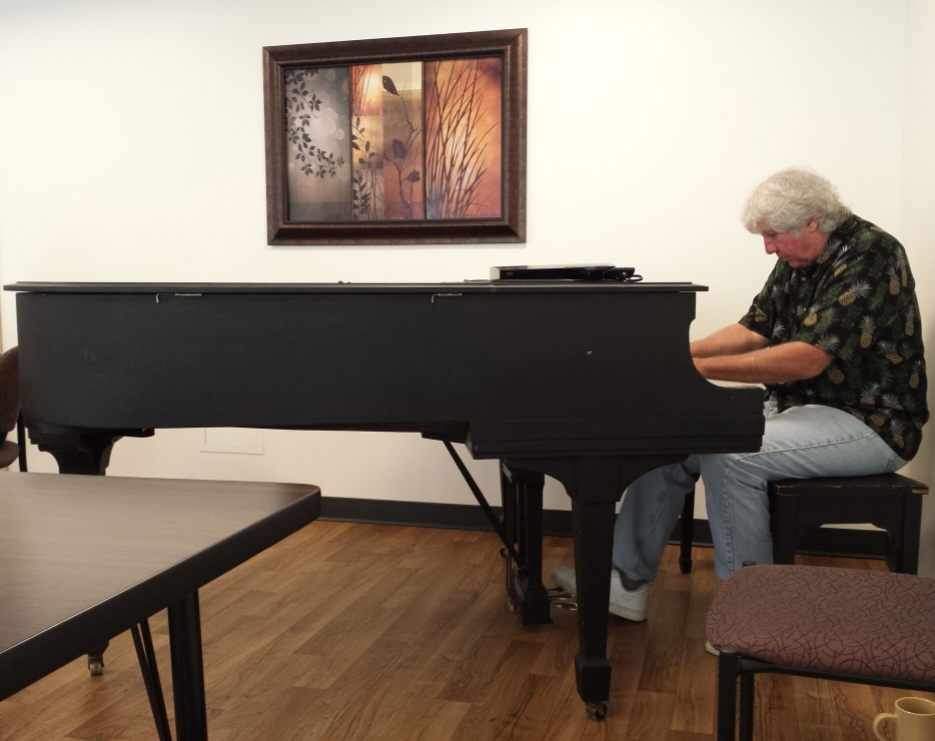 On a recent afternoon, Bill sat down at the piano and played while people gathered in the room to listen.

One of them called out appreciatively, "Thank you for coming to play for us."

Bill responded without missing a beat,

Watching him play, and noticing listeners get caught up in his reverie, you can understand why people say music is redemptive. People in the room just sat back in their chairs, relaxed their shoulders, closed their eyes and let the harmonies lift them. It was like a collective daydream.

He plays an electronic keyboard at Huot House, but, he says, it is a very different quality of sound than a real piano. "Pianos are stringed instruments," he explains, "And when you strike one key, the string it hits causes all the strings around it to vibrate and they carry the note to a whole different place. One note is actually made of many notes."

All of us in the room could feel that resonance.

"When you strike one key, the string it hits causes all the strings around it to vibrate and they carry the note to a whole different place. One note is actually made of many notes."

Between songs, Bill talks about "this crazy life" and the gifts that have come his way. It's clear when he tells his story that helping hands showed up when he most needed them, but Bill does not wait for grace. Instead, he embodies it and shares his gifts with whoever comes his way.

The "one note" made of many.

Bill's story inspired Veterans Affairs Susan L. Whittington and filmmaker Sean C. Williams to make a short film about his journey (you can watch it here). In the film, Huot House's Ken Darby says, "Bill epitomizes the philosophy of Veteran's Services: Run towards life, embrace it, don't run away from it…do it one day at a time and never give up."

You can hear it in his music. And in his words, "You gotta do what matters to you. This crazy life goes by quickly. Grab it. Be in it." Around the room, we all nodded in agreement. And, restored by Bill and the baby grand, the audience slowly got up to thank him, one by one, filled with notes.

November post script: Bill called us to tell us that he was asked to be on a panel in Washington DC about Veterans and Homelessness, listening to his story were Michelle Obama and Jill Biden!