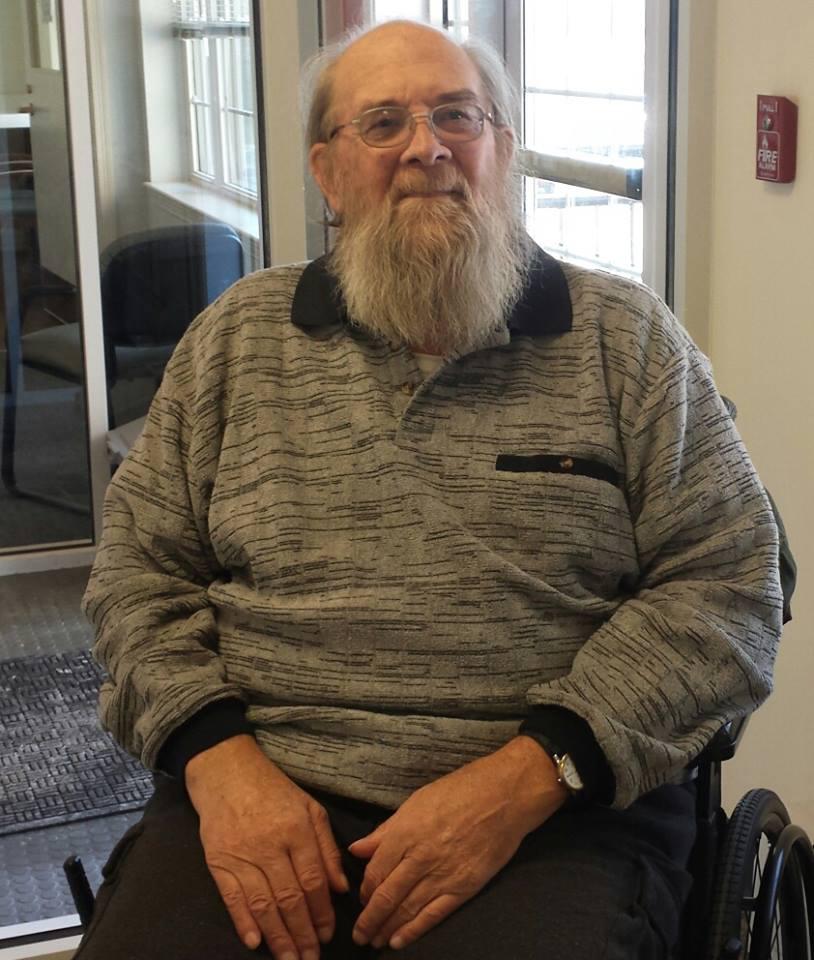 He moves around in a wheelchair that he pulls, pushes and steers with his feet and sometimes his arms. He can stand up and walk without the chair for short periods of time, but his body can no longer do the work to hold him up for long.

Ben grew up near Moosehead Lake. He went to school in a two-room schoolhouse until 6th grade, then finished up high school in Greenville, Maine, population "around 1400." He worked in the woods industry for most of his youth and adult life, cutting and hauling wood to places like, "Stratton, Eustis, Pittston, Greenville, Jackman…" Names that evoke far-flung settlements separated by hundreds and hundreds of miles throughout Maine.

For a short while, he took a job as a caretaker for a "gentleman's farm estate" in Piscataquis County. They raised Belted Galloway cows and had Percheron horses, complete with a coach that had been in the Rosebowl parade. "We painted it all up so it looked new and bright, that was something," he says, shaking his head and laughing.

Along the way, Ben was hired as a "go-fer" at a welding shop where he "did everything but weld." Besides intense physical labor at the shop, he did all kinds of odd jobs: snowplowing, running errands, shoveling, and moving machinery. He did all the work that others weren't strong enough to do.

After a 4 year stint with the Army Engineering Division, he came back to Maine and moved into his family home. Heavy drinking led to life-threatening health problems and he had to stop working. Depression sank in and his drinking got worse. He couldn't clean his home or care for himself. As he puts it, "My body just gave out. I was a festering mess."

One day in July 2014, his sister found him and called an ambulance. He was taken to The Veterans Home Hospital in Bangor. They could not care for him and sent him to Togus where he was admitted into Hospice.

"It used to be an asylum," Ben says, "the word 'Togus' means clear water. There were mineral springs on the land. It was a place where troubled and injured people would come to live until they were cured."

Five to ten percent of patients who go into Hospice actually leave the program in better health. "Graduates" they are called, and Ben is one of them. He spent 10 months in Hospice where he quit drinking and his health steadily improved. It was time to find a new home.

A Hospice volunteer told Ben "wonderful things" he had heard about Volunteers of America's Margaret Chase Smith House (MCSH) in Augusta and they went for a visit. "I looked at a lot of places to live and when I saw this place, I knew it was my new home." With help from Hospice, MCSH's Resident Services Coordinator Carmen Daigle, and neighbors, Ben settled into his apartment in July 2015. Carmen helped get him set up with senior benefits and into the Buddy System and he began his new, "independent" life.

Ben rides the bus to Togus every week to volunteer and visit with Hospice patients. His job, he says, is to make people laugh in the midst of a hard life and many sad stories.

"You can tell when one of us dies (at Togus), you see them pushing a gurney covered with an American flag through the halls. One day I decided to get up out of my (wheel)chair and stand up to salute. Pretty soon everyone was doing it and those guys now get a proper send-off, the halls lined with everyone standing at attention and saluting." He is proud of the tradition he started. "Somebody put me on a path so I'm going to follow it through."

At Margaret Chase Smith House, he says, "It's been an adjustment. I'm not out in the woods anymore, people are right up close to their neighbors so we know each other's business, but that is a good thing, we can help each other out." And they do. His neighbors say he is kind and funny and helpful. He says the same about them. "That's what it's all about."