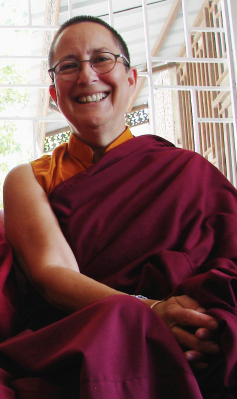 Ani Jane grew up in New Jersey, USA and discovered her path with Buddhism at 12 years old.

In 1996 she took refuge in the Sakya tradition and her formal studies began in New York City.

In 2004 she moved to India and Nepal where she lived until 2012. While there she continued her Dharma studies, taught computer science and English as a volunteer.

In 2006 Ani Jane received her vows of ordination from His Eminence Luding Khen Rinpoche, the leader of the Ngor school of the Sakya tradition.

She has studied extensively with His Holiness the Dalai Lama, His Holiness Sakya Trizin, His Holiness the 17th Karmapa, His Eminence Dzongsar Khyentse Rinpoche, and many others. She also studied many of the great treatises and Buddhist commentaries at the IBA school in Nepal for 4 years.

Ani La has received empowerments and transmissions of all major lower and highest yoga tantras, including 4 Kalachakras and is a practitioner of the Hevajra and Vajrayogini tantras.

She received the entire transmission of the Sakya Lamdre Lob Shey in 2011 with His Holiness Sakya Trizin, His Eminence Ratna Vajra Rinpoche and His Eminence Gyana Vajra Rinpoche. Previous to devoting her life full time to the Dharma, Ani Jane worked as a Network and Desktop computer engineer managing all the networking and computer systems on the trading floor at several brokerage firms on Wall Street.