It's All About the Kids

A Conversation with Camp Leaders 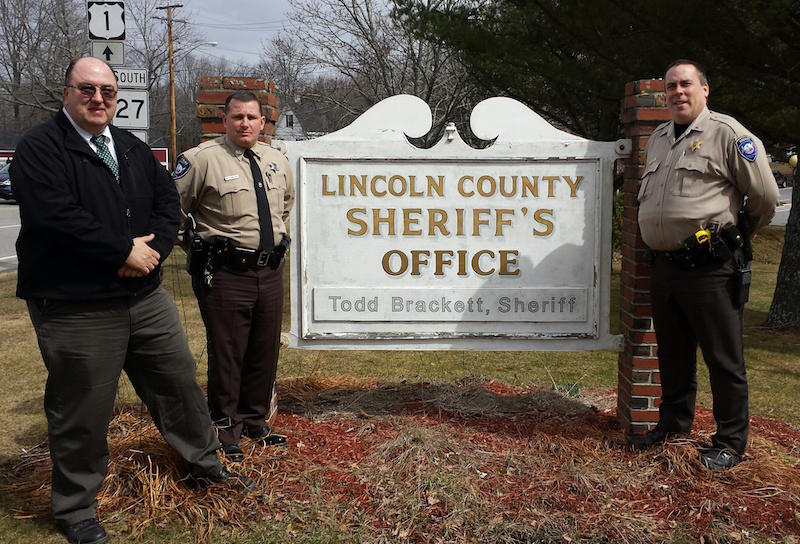 Camp POSTCARD (Police Officers Striving To Create And Reinforce Dreams) is a free week-long summer camp program for Maine 5th and 6th grade boys and girls. Established in 1994 as a partnership with the Maine Sheriffs' Association, Maine D.A.R.E., and Volunteers of America, Camp POSTCARD is unique – all camp counselors are volunteer members of Maine's Law Enforcement Community. 150 kids experience the wonders of a summer camp adventure, while learning that the officers they meet can be trusted mentors who are there to help when needed.

Every spring, our camp leaders spend a week of their time (in some cases, their own vacation time) to come to Camp POSTCARD and be in an unheated cabin full of kids, regardless of the weather, and regardless of whatever else is going on. Some departments, like Lincoln County Sheriffs, have a relatively small force, twenty to twenty-five people, and for them to send six of their staff to Camp for a week says worlds about their belief in the Camp program and mission.

These women and men are from all over Maine: sheriffs, police officers, corrections officers, firefighters, state troopers and school resource officers. They come back every year because they want to make a difference. They've seen how a week at camp can shape a child's future, and it gives them great satisfaction to be a part of the gentle nudge that teaches kids about goals, discipline, teamwork, respect, and structure, all within the context of natural surroundings and play. 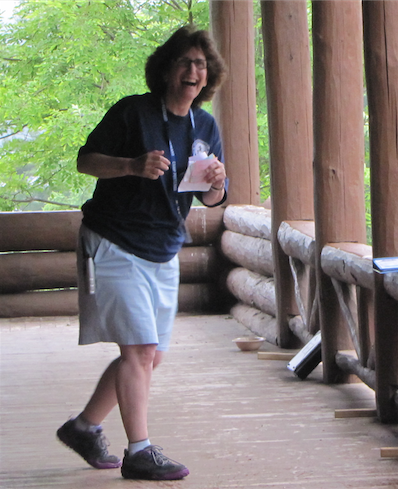 In conversation with retired State Trooper Christine Buchanan (photo, left), Lt. Rand Maker, Lt. Michael Murphy, and Deputy James Read, many common themes were echoed: paying it forward, the value of structure, the joy of a job well done, the satisfaction of running into kids years later and being thanked over and over again, the transformation of the campers from the first day to the last, and the lessons learned that will resonate for a lifetime.

You can tell by their voices that these folks live what they teach. Respect. Compassion. Concern. Service. Camp has all of it.

Christine Buchanan beams when she talks about Camp. She's one of four Camp directors, has been part of Camp since the start in 1994. "I had a lot of joy growing up. In my family, children were valued. There were great family dynamics. That's why I worked in the DARE program. Adults can make a big difference in a child's life. That's what keeps me coming back. Camp is my passion."

"Most people in law enforcement put family and community at the top of their list of what's most important. Camp fosters those feelings of heart, being connected, feeling respect. You want your life to mean something. The leaders come back every year because they really care about these kids." 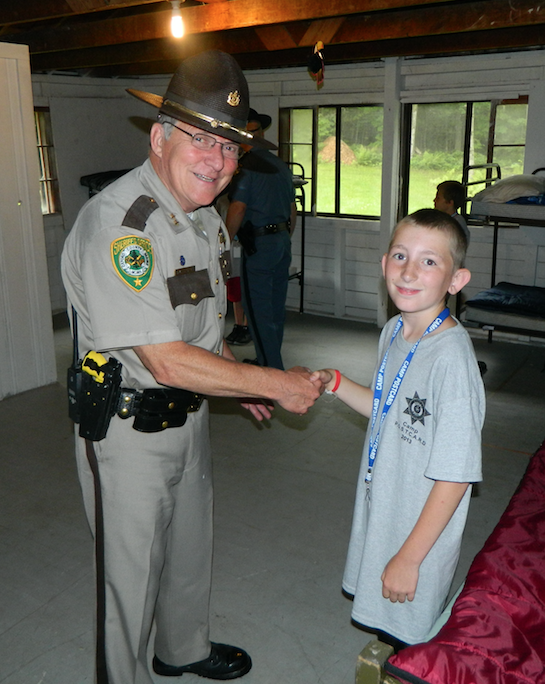 "They give their time, their patience, their humor, they give in so many ways. As camp leaders, they are at work 24 hours a day for seven days."

Lt. Maker, another Camp director, agreed, "There were people in my life when I was a kid that went out of their way to make my life better. I go to camp every year to pay it forward. Last year a former camper came up to me and thanked me for his week at camp a couple of years previous. Then he said he couldn't wait to be 16 so he could be a CIT (counselor in training). That says so much."

He continued, "Lincoln County couldn't do what we do without the support of Sheriff Brackett. He believes deeply in the program. We leave Lincoln County in mid-June and come back just before the 4th of July weekend. We feel like we've been gone for a long time, and it's a whole different world when we return. Summer has started, the population has doubled, there's traffic. But Camp stays with us for awhile."

Lt. Murphy talked about the change he sees in the kids during the week. "We take their pictures when they get here and make ID badges for them. By the end of the week they look like a whole different person. They all notice it. We make them a DVD of the week and they get to take it home. The difference seven days can make is incredible." Then he said thoughtfully, "You can look at it as, 'We invest in them now or we will deal with them later.' Kids just need to know someone cares..."

"...and they need to have fun." Deputy Read added, he is in charge of Land Sports. He recalled the year it rained all week. "We did everything indoors: archery, arts and crafts, running. We set up a makeshift slip and slide on a hillside in the rain, they had a ball." The washers and dryers got a real workout that year. 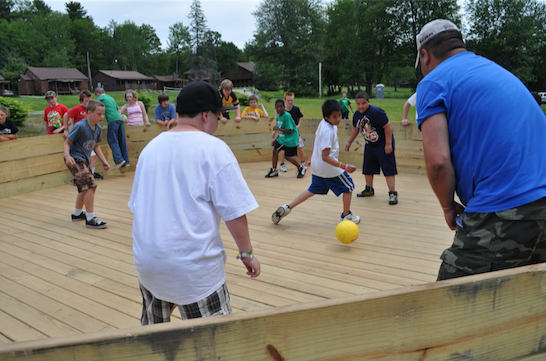 Deputy Read also helped build the Gaga pit. Gaga is a "gentler form of dodgeball," he explained. Most kids have no idea about the game at first, but they get out there with their leaders and everyone is on a level playing field. Everyone has fun, gets dirty, laughs. Campers get to see their leaders goofing around as teammates.

The bonds that form during the week are strong and lasting. Christine Buchanan told of one leader who, "told historical stories to the kids at night. He was so touched when he realized his campers were actually listening and interested to hear more." All of the leaders talk about the kids that arrive at camp crying and homesick and soon are happily playing, fishing, and making new friends. At the end of camp, no one wants to leave. We hear stories of kids who have continued to keep in touch with their cabin mates years after their week at camp. 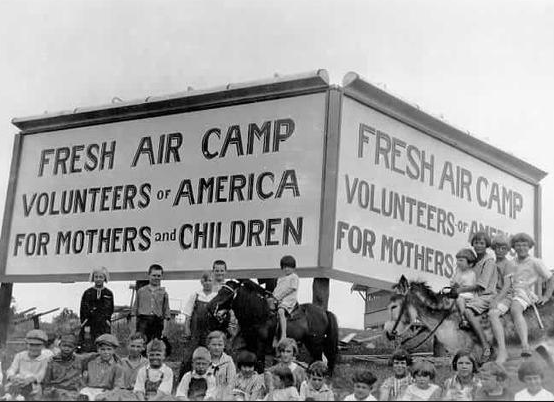 Camp POSTCARD began in 1994 when members of the Maine Sheriffs Association and the Maine DARE Officers Association (Scott Kane and Christine Buchanan) approached Volunteers of America to help them start a camp for the kids they worked with in the schools. Many of the kids needed something to do in the summer and the departments wanted to make a difference by offering a camp experience. They came to Volunteers of America because of their experience running programs, including summer camps, going as far back as the mid 1900s with the Fresh Air Camps.

Lt. Maker explained, "The first year we, leased a Boy Scout Camp in Eddington, Maine and there were a total of 93 campers from all over Maine. Now, all these years later, we serve an average of 150 5th and 6th graders each year with 100+ law enforcement officers and volunteers."

"We have learned so much over the years," Lt. Murphy added, "For instance, we used to have a disco dance at the end of camp, but now we do it at the beginning as an icebreaker and we don't call it a dance, really helps with that age group NOT to call it a dance." Lt. Read agreed, "Now we call it a Welcome Celebration. We turn the music up and let the kids have fun."

Along with their leaders, the kids live and play together as a family unit for the week. On the last evening, the officers march, in uniform for the first time, for the final closing awards ceremony. "It's great to see the campers' faces as we march by in uniform and it hits them that their leaders are from Law Enforcement," Deputy Read said. Lts. Maker and Murphy nodded in agreement. "They call us by our first names all week, and now they find out we're officers. It gives them a chance to know us as people first, and officers second." 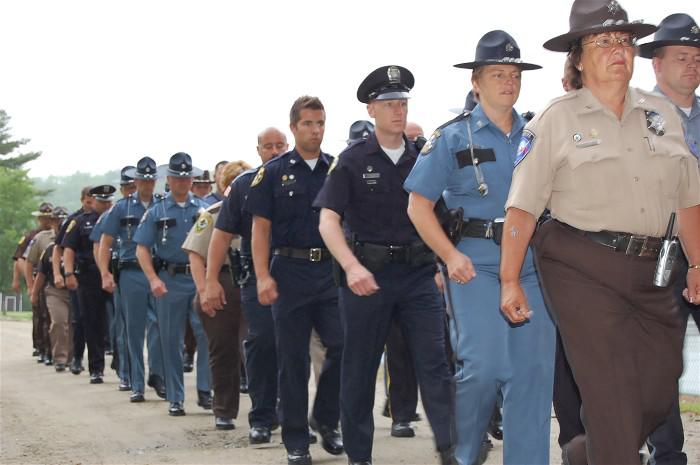 "Also, the day we all wear the chef hats the kids made," he continued, "We line up to serve them breakfast. They get a big kick out of that. Those hats mean a lot to us." 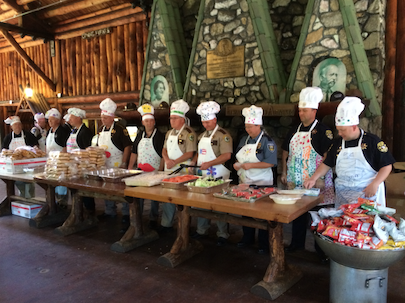 A Week At Camp 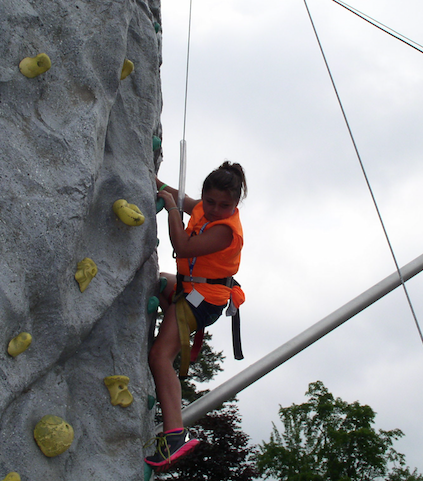 Every day is carefully organized to assure that all campers can participate safely in all activities and feel encouraged to join in new experiences. During free-time, campers can go swimming and boating at the lake, do arts and crafts, go fishing, learn and practice archery, play land sports (like Gagaball, hiking, etc), and play on the climbing wall. 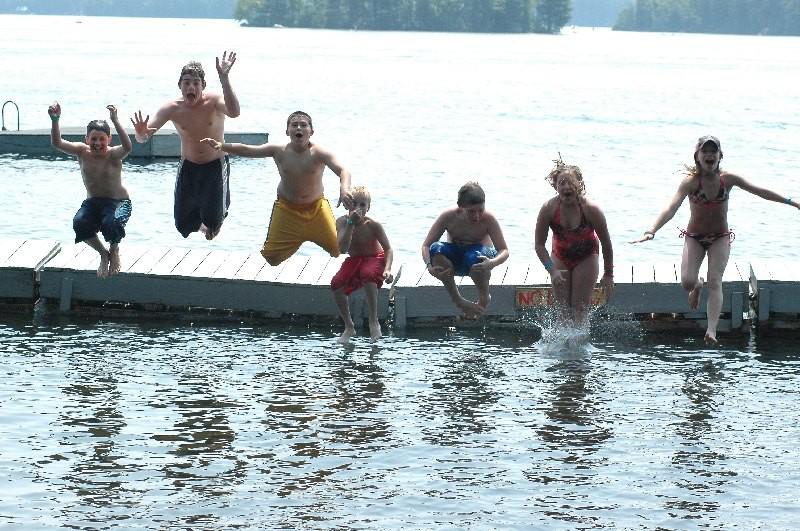 Demo Day is Wednesday of Camp Week. "All walks of public safety show up with their equipment, and the kids crawl all over it, try it on, learn to operate it," said Lt. Murphy, "fire departments, police departments, rescue squads. There is a K9 Demonstration the kids love." 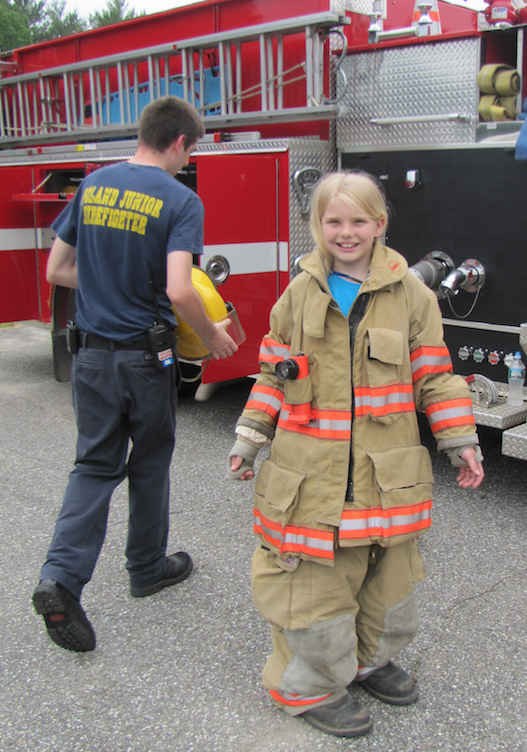 "And then there is the VIP inspection, the kids love that too," adds Deputy Read, "Where the kids clean up their cabins really well and then wait for inspection and feedback on how they did. And the awards ceremony is another favorite, where 2 or 3 awards are given out for each cabin."

Christine Buchanan explained that campers are given very clear expectations and guidelines. "If they violate those guidelines, they have to face consequences, like maybe help clean the kitchen during some of their free time." She went on to say, "Part of what makes Camp great is the structure. It's clear, it's strong but there is a lot of play within the structure. Kids respond when you tell them what you expect and you recognize them for doing well." Building confidence in that way helps kindle trust and encourage them to try new things.

Seeing that transformation in the campers is a big part of the reason leaders come back year after year. "It makes you feel like your life means something," Buchanan said with a smile, "Knowing you can help."

Camp is FREE to all Campers

In addition to typical Summer Camp expenses of food, transportation, rentals and staff time, we provide campers with their own sleeping bags, pillows, towels, shoes, swimming suits, shorts and T-shirts and we send kids home with a backpack full of school supplies.

Lt. Murphy said, "People are flabbergasted when we tell them how low our costs are at $400 per camper." Even so, fundraising is a year-round effort and the Sheriffs' Association works in concert with Volunteers of America to make it all possible.

There is no way Camp could happen without help from all over the state. Every county donates food for the camp kitchen, and we still have a shortfall every year. Everyone agrees it is essential to provision campers well and to do everything possible to make the week successful...for everyone.

If 150 happy campers weren't enough assurance of our job well done, the letters and phone calls we receive, and the kids that return years later to be leaders, tell us it's all worthwhile.