Residents Give Back to the Community

“Sometimes life takes people in strange directions,” says Jerome Weiner. “Our job is helping them find their way back.” 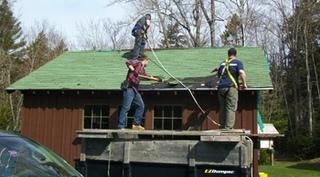 Jerome is the director of the Maine Coastal Regional Reentry Center in Belfast, Maine — and has reason to be an enthusiast. “Last year we contributed almost 4,000 hours of volunteer work to 35 nonprofit partners in the community and 20,000 pounds of fresh produce to local food banks — while helping change clients’ lives for the better.”

The Reentry Center, run in cooperation with Volunteers of America and the Waldo County Sheriff’s Department, is a 32-bed residential program housed in a renovated county jailhouse. It is designed to help minimum-security male inmates in the final months of their incarceration make a healthy and productive return to their families and communities. The program’s other principal partners include the Maine Department of Corrections, Maine Board of Corrections, and Restorative Justice Project.

“I love my work!” says Weiner with a big smile. “I’m honored to have the opportunity to do it. For many years I was the administrator of a large nonprofit, and I never really, directly saw the good that we did. Now I see it every day!”

"The fear and potential for discrimination are real."

Weiner explains that former offenders face real obstacles. “The fear and potential for discrimination are real. They’re also legally discriminated against in various ways. Former offenders can’t work with children, for example, teaching in public schools, even if their crimes had nothing to do with that. And they can’t carry firearms (which means you can’t hunt, which many Mainers like to do). On top of that, many of them don’t have a family or job to return to, enough money to pay for health care, or a place to sleep.”

The Center’s work is evidence-based — and actually costs less than jail time. “We offer programs in everything from philosophy and cognitive behavioral therapy to yoga, mindfulness, relationship building, nonviolence, volunteer community service (under staff supervision), and getting a job,” says Weiner. “Even apart from helping clients ease their reentry, those jobs let them pay off their restitution and fines — plus part of their own room and board — so they can start with a clean slate.”

In recent years the Center’s clients have helped a wide range of local nonprofit and municipal organizations with needed services, such as moving things for churches, painting and renovating granges and museums, prepping summer camps for the season, cleaning and building trails for state parks, serving food at soup kitchens and food pantries, and more. “We also grow a big two-acre garden that gives vegetables to food pantries,” Weiner adds. “Last year our crew moved the entire contents of the town library. You name it. And the community has been very kind to us in turn.”

The Center also offers group and individual mentoring, community resolution conferencing, healing circles, and more. “Our goal is to help inmates accept responsibility for their actions,” says Weiner, “and to break the patterns that led them into the circumstances of their crime. We don’t take sex offenders or violent offenders, because that would be unfair to the community.”

How are the community partnerships formed? “They’ve really snowballed,” says Weiner. “Our team goes out into the community, and various nonprofit groups ask for our help. But our clients do such a good job that we get great word of mouth from year to year and, these days, more requests than we can handle. Even apart from our own organization, everybody has become so excited about what we do. We’ve held an annual event to thank the agencies that let us serve them. But this year the group got so big that we did a breakfast for the nonprofits and a lunch for our business partners!”

Weiner adds that the greater Belfast community has been exceptionally welcoming. “I’ve never been in a community as open as this one,” he says. “A lot of it is that our chief partners — the local sheriff and Volunteers of America — are liked and honored. Also, Belfast has had a terrific renaissance over the past several years as a cultural and economic success story. It has really been reborn in a big-spirited way.”

The Center’s business partners consist of the local for-profit organizations that hire the Center’s clients to work. “We have ongoing relationships with car dealerships, food processors (including potatoes and frozen fish), restaurants, farms, and others,” Weiner explains. “Also, many of our clients have skilled trades and are able to get appropriate work as carpenters, auto mechanics, auto-body specialists, and painters, for example. These partners are an invaluable gift to us, to our clients, and to the community, because they’re willing to give our guys a chance — and put money where their mouth is. We’re deeply grateful for that.”

Community relationships have a lasting effect

When the Center’s clients re-enter their lives in the community, their relationships with the Center’s partners often continue. “That’s right,” says Weiner. “Some of our former clients go right on with the job they first landed here. Even their relationships with the nonprofit partners can have lasting positive repercussions. If a client did volunteer work at a local church, for example, and then started attending services there, he might continue doing so after his release. Or if his home is farther away, he might find himself joining a church near home. I’d say that’s a good thing.”

The Reverend Alan Shumway agrees. Alan is the pastor of the First Baptist Church of Belfast (American Baptist Churches, USA). “We had a volunteer from the Reentry Center who came to the church to assist with our local drama group,” he says. “He was doing lights and building sets — and then played a bit part in a show. Last summer, several Center clients were asked to help build steps for a theater production down in the park by the harbor. The director of the show loved this man’s work and his work ethic. Today, he has continued with us, getting involved in a Thursday night music fellowship at the church and helping out with lots of volunteer labor. He now worships with us regularly and has even been a reader. This has been a very positive experience.” The reverend also trained with the Restorative Justice Project and is now mentoring an additional client from the Center.

The Restorative Justice Project promotes fundamental change in the justice system and schools, responding to crime and wrongdoing by seeking renewal and safety for the community, support and healing for victims, and accountability and reintegration of offenders.

The Reverend Tom Duplessie, a retired social worker who is also an Episcopal Church deacon, adds that he moved to the Belfast area last year and got involved with a local soup kitchen. “I met several of the Reentry Center’s clients there,” he says. “They were volunteering as part of their program. Then last November I trained to be a mentor with the Restorative Justice Program — and have been mentoring several more of the Center’s clients ever since. I even see some of the guys at a local gym! Basically I realized I want to do this type of mentoring as my ministry now — and I’ve been very impressed with the men, the program, and the quality of the staff. I really feel like I’m part of the team.”

Do the Center’s programs help reduce the recidivism rate? “Absolutely,” says Weiner. “Our methods are innovative, but they’re based on proven research. And as I said before, they actually cost less than having people sit in jail. It’s a remarkable thing — and a win–win for everyone.”