Hundreds walk at Togus to raise awareness of homeless veterans 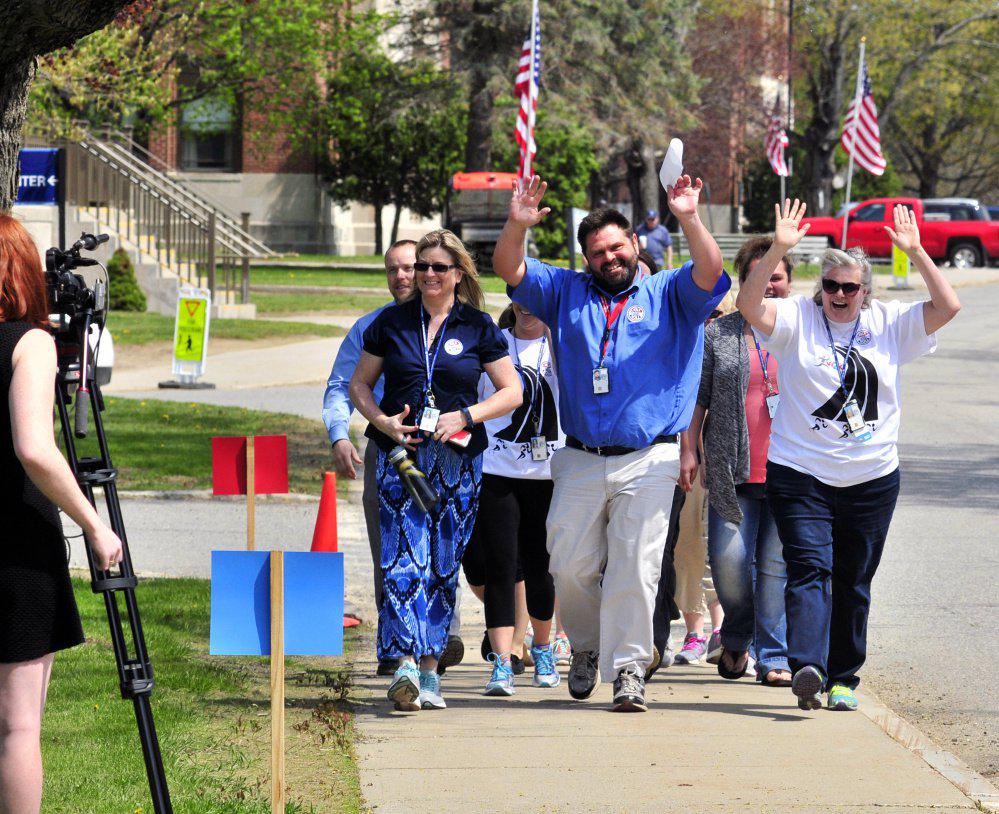 A group of employees from the community care team wave to the cameras at start of the 7th Annual VA2K Walk & Roll event at the VA Maine Healthcare Systems-Togus on Wednesday. Staff photo by Joe Phelan

Hundreds walk at Togus to raise awareness of homeless veterans

The VA2K Walk & Roll event included a 1.2 mile walk and dunk tank, and many participants donated money or household items, which will help homeless veterans across the country.

A group of employees from the community care team wave to the cameras at start of the 7th Annual VA2K Walk & Roll event at the VA Maine Healthcare Systems-Togus on Wednesday. Staff photo by Joe Phelan

CHELSEA — Hundreds of people took part in a walk to promote wellness and raise awareness of homeless veterans in Maine Wednesday afternoon.

Togus executive director Ryan Lilly — wearing sunglasses, a button-down shirt, slacks and running shoes — said raising awareness is such an important step in trying to solve the homeless veteran problem. But it isn't without challenges and there are questions that need answers.

"How do we inform people that need to know what resources are available and how do we connect ourselves to the patients that need it?" he said. "We've made a lot of progress, and there are a tremendous number of groups that want to help."

During the event's opening ceremony, Lilly told the crowd that a single homeless veteran is "one too many" and there is significant progress being made to end veteran homelessness around the state.

"This is not a problem the VA will solve itself, because it's too big for us," he said. "We knew we needed outside partners and groups, and we've had so many help us."

Participants were encouraged by event organizers to bring household kitchen items that will be given to homeless veterans, and by noon, the donations were piled high near the event sign-up table, and there was a bus full of items courtesy of MIKA fitness in Manchester.

Owner Rebecca Pushard said it's an important cause and she wanted to continue providing as much support and help to homeless veterans as she could. She spent about $300 of her own money at Wal-Mart and Dollar Tree on items including soap, plates, napkins, cups and other household items, and a MIKA bus was filled with bags of donated items from people in the community.

"Two years ago, we set a goal to collect 100 items, but we collect 1,400 items in less than four days," Pushard said. "I know a lot of people, so I just used my connections and used my voice to get people to take part in the event or just donate items."

Continuing with the day's theme of raising awareness, Pushard said she came across many people who never heard of the VA2K event, despite this being its seventh year. She had the opportunity to educate people about the program and the cause, which only helped get more people involved.

"I was able to spread the message of what this is all for," she said. "Our mission was to collect a little bit of everything, because just think about how you'd feel if you didn't have those things."

Walkers traversed a 1.2 mile-route around the sprawling campus, including passing the site of the new Cabin in the Woods facility, which will include 21 units for homeless veterans and their families. The organization in charge of that project scheduled a groundbreaking ceremony at the site for Friday morning.

Debra O'Brien, a Navy veteran and medical support assistant in the VA Community Care department, walked with about 20 colleagues and said the nice weather and the good cause made it an enjoyable stroll. To her, raising awareness and getting rid of the stigma around homelessness is key to solving the problem.

"I had no idea how many homeless veterans there were until I started working here," she said. "I think people believe someone's homeless because they're lazy or trying to live off someone else, so you have to get rid of that stigma. This is near-and-dear to our hearts, and it's fun to get out and walk as a team."

O'Brien said more events like the VA2K walk is a way to keep getting people informed about the homeless veteran problem.

Last year, nearly 25,000 VA employees across the country participated in the VA2K event, which raised close to $385,000 in goods and money to help homeless veterans.

Lilly said despite a divisive national political climate, helping veterans has been able to stay clear of that divide and remain a non-partisan issue.

"It's an issue that Democrats and Republicans have historically rallied around, so we're lucky in that way," he said.

As the people continued to come out of Togus buildings and walk the route, taking a chance at the dunk tank and enjoy a cheeseburger or hot dog, veterans mingled with volunteers and staff and showed appreciation for the event.

Floyd Junkins, a former homeless Army veteran, walked around taking pictures of the participants, the volunteers and even Mrs. Maine America, Cynthia Peters. Junkins said there's still a long way to go to end veteran homelessness, but events like these are important steps.

"We're not there yet, but a few years ago, I was living in the back of my car, so we've all come a long way," he said.