The $4.2 million Cabin in the Woods project will build 22 cabins for homeless veterans. 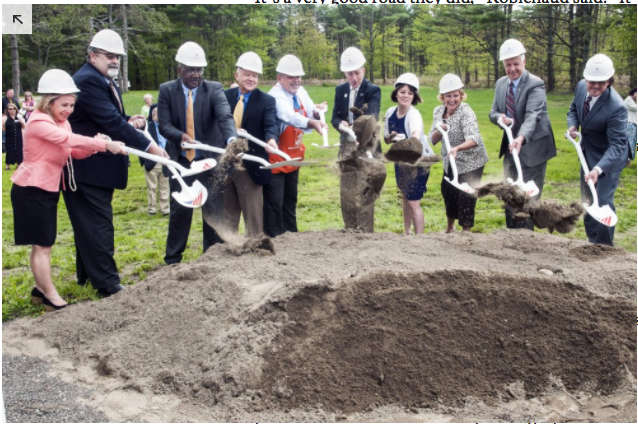 Dignitaries toss a ceremonial shovel of dirt at the Cabin in the Woods groundbreaking on Friday at VA Maine Healthcare Systems-Togus. Staff photo by Joe Phelan

The $4.2 million Cabin in the Woods project will build 22 cabins for homeless veterans.

CHELSEA — Joseph Robichaud traveled from Biddeford to be a part of the Volunteers of America celebration Friday morning as officials broke ground for the Cabin in the Woods project.

In the works for about seven years, the project will build 22 cabins for homeless veterans on 11 acres at the VA Maine Healthcare Systems-Togus campus for which the Volunteers of America Northern New England holds a long-term lease. 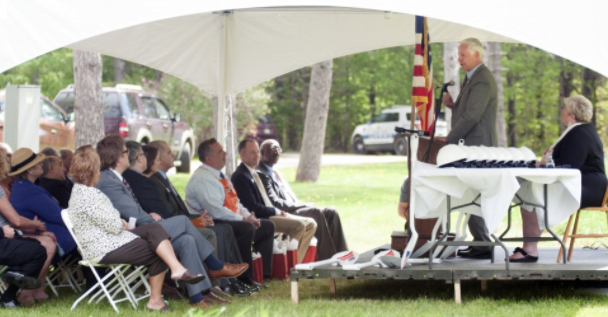 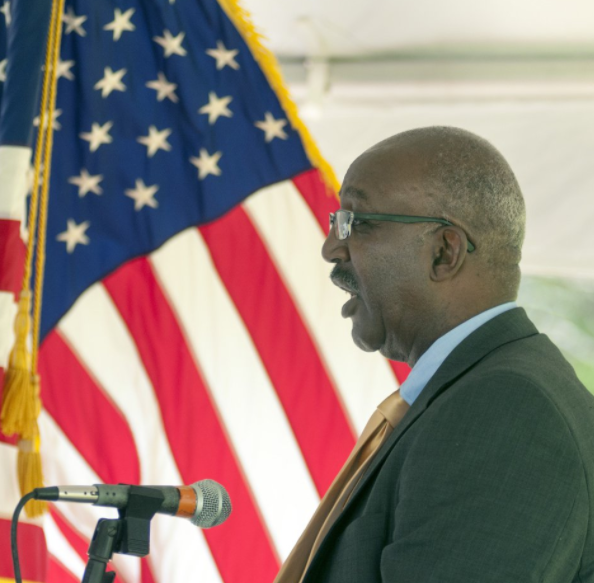 "It's a very good road they did," Robichaud said. "It was winding and troublesome but worth it. It's a good reward for the veterans."

The $4.2 million project will add to the housing options that the Volunteers of America Northern New England will be able to offer homeless veterans in Maine who need help and support.

Cabin in the Woods will consist of 16 one-bedroom cabins, five two-bedroom cabins and a community cabin at the south end of the Togus campus. The housing community is expected to combine accessible health care and services from the Veterans Affairs facility with rural living.

Just two weeks ago, Robichaud moved into his own apartment in Biddeford after spending a year and a half in Huot House. More formally known as Arthur B. Huot Veteran Housing, the Saco facility is a co-ed transitional residential program to help homeless veterans run by Volunteers of America Northern New England. The nonprofit organization also operates the Veterans Career House for homeless male veterans.

"The VOA helped me get out of a sad situation of addiction," Robichaud said. "I've been clean and sober for two and a half years."

Robichaud, who served in the Army from 1999 to 2002, spent time in Germany before ending his service at his last duty station at Fort Jackson in Columbia, South Carolina. Then the Old Town native wanted to come back to Maine.

"We shouldn't have any homeless veterans," he said. "They fought for the freedoms that everyone has."

Ryan Lilly, director of the Togus system, told the assembled crowd of more than 120 that when Eric Shinseki was first appointed to lead the Department of Veterans Affairs, he was struck by contrasting images of veterans: They were brave warriors overcoming hurdles and providing tremendous service to the country, and they were homeless, sometimes suffering from substance abuse and often forgotten.

When Shinseki announced he wanted to end homelessness among veterans, Lilly said, the VA realized it would have to try new things and reach out to new partners to be successful.

Among the other speakers Friday were Mike Michaud, a former assistant secretary of the U.S. Department of Labor and former U.S. representative from Maine's 2nd District who served as chairman and ranking member of the House's Committee on Veterans Affairs; and June Koegel, president and CEO of Volunteers of America Northern New England. Maine first lady Ann LePage, who advocates for military service members and veterans, was also at the event.

The project received its final approvals from the Chelsea Planning Board in February.

Cabin in the Woods is expected to be permanent housing, and the units will be furnished. With five two-bedroom cabins, the project will be able to accommodate families. All of the cabins will be energy-efficient and accessible for people with disabilities.

Funding for the project came primarily through the Maine Housing Authority. The Home Depot and TD Bank Charitable foundations and the U.S. Department of Veterans Affairs also donated to the project.

While Robichaud is settled in Biddeford, he can see the appeal of the setting for the Cabin in the Woods project.

"Biddeford is too big a city for me," he said. "I like my peace and quiet. I am not a social person. I like to stay reclused."

When construction is finished, he said, he'll be back for the ribbon cutting.

"They are saying November, but I am thinking in December," he said.