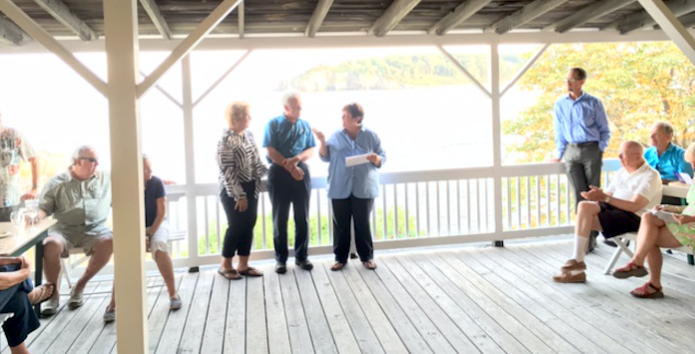 In the glow of the setting sun, Mary Toole (on the right), Committee member of the Peaks Island Fund, presented a grant award to Bill Browning and Marge Powers, Peaks Island Health Center Board Chair.

Michael Coon and Bill Browning of Volunteers of America hopped on the Casco Bay Lines Ferry last Thursday and attended the Peaks Island Fund's Annual Awards Dinner, where Volunteers of America and Peaks Island Health Center were honored with a generous grant award. A sumptuous buffet was served on the deck overlooking the ocean at the Maine 5th Regiment. It was a perfect summer evening.

Residents of Peaks Island work tirelessly to provide for their neighbors and support organizations that bring services to Peaks and other island communities. There is much to be proud of on Peaks Island. 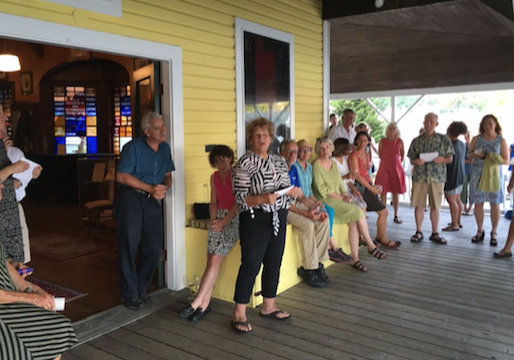 The Peaks Island Fund has generously supported Volunteers of America projects over the years, including raised garden beds for vegetables, herbs and flowers at the Fay Garman House, technology improvements, and a WII Fit program for senior residents.

"The Peaks Island Health Center, which adjoins Fay Garman House, will be a more welcoming place thanks to this year's grant from the Peaks Island Fund." said Bill Browning, "With the push of a button, automatic door openers will make it easier to access the Island's only health center." And for a community that is home to seniors, parents with strollers and small children, folks in wheelchairs, and others who just don't want to deal with those big heavy doors, automatic openers are a big deal.