AUGUSTA, Maine — Lawmakers on the Legislature’s Labor, Commerce, Research and Economic Development Committee on Thursday gave unanimous support to a bill that would provide up to $1 million in state funds to help launch a project that would build up to 21 cabins for homeless veterans.

The bill, LD 1062, sponsored by Rep. Jared Golden, D-Lewiston, is meant to jump-start the Cabin in the Woods project, which is being headed by Volunteers of America and would be located on the Veterans Administration Togus medical campus, which sits on land in Augusta and Chelsea. 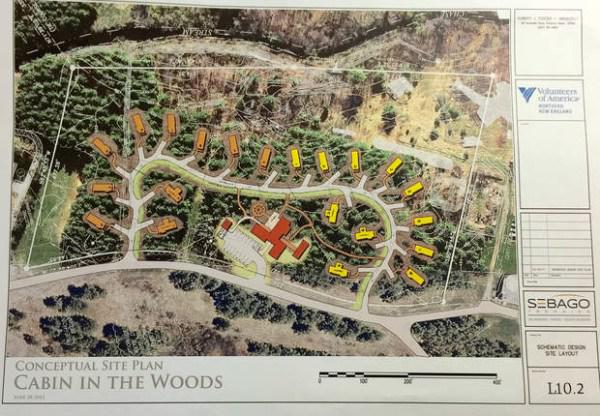 The committee approved an amendment to the bill requiring a binding service agreement between Volunteers for America and the VA to ensure the federal government will provide services to the veterans housed at the project and also a requirement that Volunteers of America enter into an agreement with any veteran living at the facility detailing what services they will be eligible for.

The amendment is aimed at allaying concerns from Maine’s Bureau of Veterans Services, which would have oversight of the project, including allowing the bureau to conduct quarterly site inspections to ensure quality control.

The bureau’s director, Adria Horn, voiced her support for the bill, provided it included guarantees that once it was built, the veterans living there would be provided the services and medical care they need.

The project is meant for both male and female veterans and includes several two-bedroom cabins that are meant to help facilitate the reunification of homeless veterans with family members, including spouses and children.

The cabins would be fully furnished and would be built to Americans with Disabilities Act standards at an estimated cost of $191,000 per structure.

The site plan also calls for a 4,000-square-foot community center that would be used for a variety of activities, according to Julia Wilcock, vice president of business development for Volunteers of America Northern New England.

Wilcock said the cost per unit for the cabins was below the national average for similarly designed structures.

State funding, which covers about a quarter of the project’s estimated $4 million price tag, will be used to help draw matching grants from private donors or federal grants that may available for the project.

Other lawmakers on the panel also vowed to help Golden find ways to fund the state’s share of the project should that become an issue as lawmakers on the Legislature’s budget-writing Appropriations Committee look to craft the state’s next $6.57 billion, two-year budget.

Golden’s bill calls for a one-time appropriation from revenue the state collects from the real estate transfer tax.

Volunteers of America have already secured a long-term lease agreement with the VA for the 11 acres the cabins would be built on.

Golden, a Marine Corps veteran who served in Iraq and Afghanistan, said he was very pleased with the strong committee support for the measure, as it will send a compelling signal to the full Legislature, which will take up the measure in the days ahead.