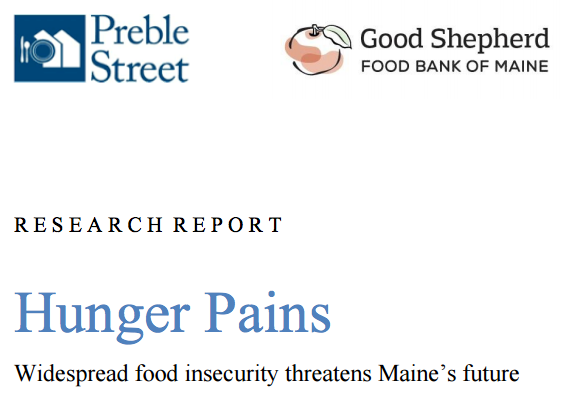 Preble Street and the Good Shepherd Food Bank have been working all year on a large scale collaborative research study about hunger that we're calling "Hunger Pains," the first and largest of its kind in Maine. We teamed up with Dr. Michael Hillard at USM to survey over 2,000 people at Maine food pantries, hold focus groups and in-depth follow up interviews. We just officially released the report yesterday!

I'm excited to share a link to the Final Report: here

None of our findings will be all that surprising to you, but they are deeply troubling. As we all know very well, Mainers struggle to get the food they need. As the rest of the nation recovers after the recession, relative rates of hunger and poverty worsen in Maine. State level policies that shrink access to programs like SNAP make hunger worse.

Coverage appeared on Maine Public Radio yesterday, which you can find here: "State Policies Have Increased Food Insecurity in Maine"

As well as in the Portland Press Herald: "Maine's high hunger rate persists even as national rate falls"

Here are two stories that appeared in the Bangor Daily News: "Make This Place Feed Me: a simple change could give Maine's hungry rural people more food"

and this: "Maine should do this 1 thing to help those who are hungry"

Now begins the important work of bringing the findings to our elected officials. Sound and thoughtful public policy can end hunger in Maine. I hope you'll share this report and message as far and wide as we can!