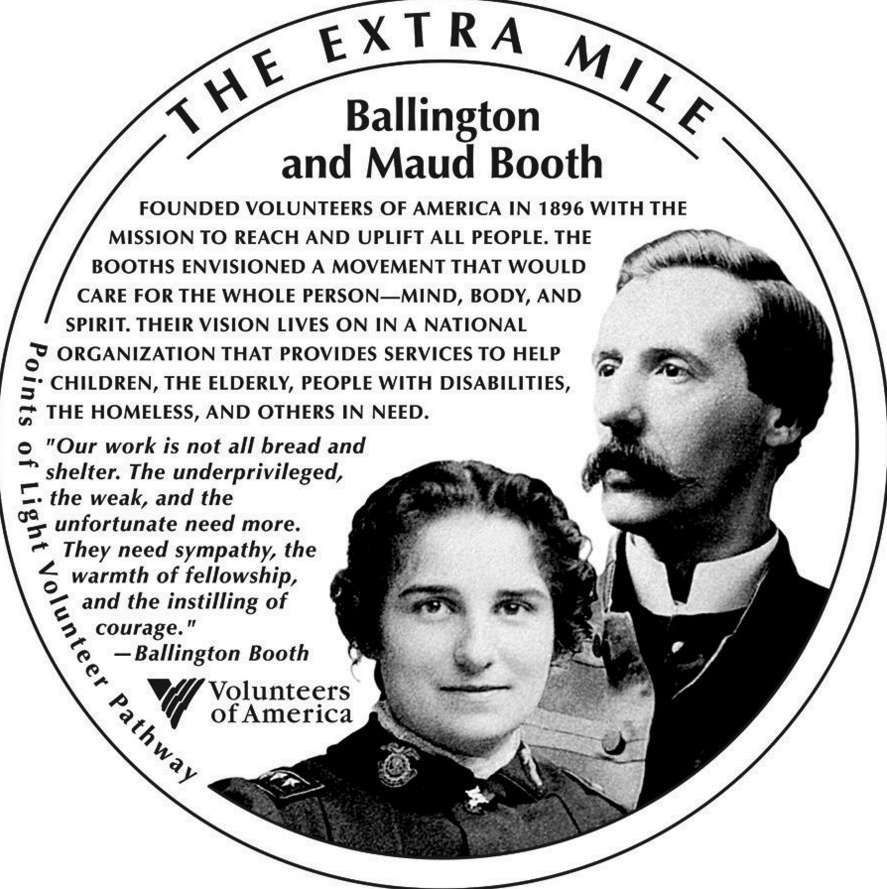 A Brief History of Maud and Ballington Booth, Founders of Volunteers of America

"For God and Country…"

The year is 1896. Responding to dire social needs and a growing American patriotism, a new movement is founded at a mass rally in New York. It's called "Volunteers of America."

The 100-year record of Volunteers of America merits a special chapter in the social and religious history of the United States. It is also the story of a remarkable couple, co-founders Ballington and Maud Booth, united for 50 years in love and service, and a vision to "reach and uplift the American people."

Though technological marvels seem to separate today's men and women from their 19th-century counterparts, the fundamental question remains the same: How can we spread justice and compassion amidst so much poverty and pain? In 1896, Maud and Ballington Booth proposed an answer: "We will go wherever we are needed and do whatever comes to hand."

The Booths, formerly commanders of the Salvation Army, organized Volunteers of America to spread the gospel message through "practical religion." Tied to the Booths' vision of salvation was a keen desire to provide material relief. The early Volunteers nursed the sick, fed the hungry, sheltered the homeless, and visited those in prison.

He was the tall, handsome son of the controversial founder of the Salvation Army. She was the petite, refined daughter of a proper Anglican rector. Her father forbade them to marry, and his father performed the ceremony. From the start, Maud and Ballington Booth were bound for a special destiny, one that culminated in 1896 with the founding of Volunteers of America.

The British-born Maud Charlesworth and Ballington Booth first met at a worship service of the Salvation Army, an evangelical movement started in London in 1865 by Ballington's parents, William and Catherine Booth. At a time when Britain's underclass was growing, the Army's aim was to save the urban masses who were indifferent to organized religion. Both Maud and Ballington were devoted to the Army's dual purpose of spiritual and social salvation. In 1887, when William Booth sent them to head the American branch, they were thrilled by the challenge of uniting rich and poor in a mission to save souls and redeem society. They arrived in a nation just recovering from a grave financial depression and wracked by labor unrest. Cities were teeming with problems: in New York alone, 1 million people were packed in tenement houses, 14,000 were homeless, and thousands more went hungry every night.

In their nine years as Salvation Army national commanders, Maud and Ballington Booth increased the Army's outreach among the poor and improved its standing among elite's who had initially dismissed the movement for its brass bands and street preaching-hallmark of the rough and sensational form of Christianity.

Then, in 1896, the Army's London headquarters ordered the Booths to leave their American post. Instead, they resigned. The reasons for the rift were many. William Booth had accused his son of letting the Army become "too American." Ballington resented both his father's autocratic control and his insistence upon using contributions from American donors to fund Salvationist work around the British Empire. The affair was front-page news. It occurred during a crisis in Anglo-American relations, when we almost went to war defending the Monroe Doctrine against the threat of British military intervention in Venezuela.

On March 8, 1896, addressing a huge rally in the Great Hall at Cooper Union in New York City, Maud and Ballington announced they were starting a new movement, at first called God's American Volunteers. Like the Salvation Army, it was organized on a military model with ranks, uniforms, and marching bands. But the new movement was to be more democratic in structure. Leaders were elected by vote of the membership, and women officers had full equality with men.

The organization's was unabashedly patriotic. At the Cooper Union meeting, the crowd stood and sang a brand-new anthem called "America the Beautiful," cheering at the finale. They left the hall to carry on under the slogan "For God and Country."

While the top priority was spiritual, the first line of action was practical. The Volunteers literally went wherever they were needed. They lived in tenement houses, serving the poor and setting up day nurseries. They started summer camps for city children, opened housing for working men and women, and established free hospitals for the poor.

Maud Booth herself began a pioneer social work program, the Volunteer Prison League, which, in addition to supporting prisoners and their families, helped ex-convicts adjust to society. Among her innovations were halfway houses, called Hope Halls, for discharged prisoners without jobs or families. Dubbed "Little Mother of the Prisons," Maud Booth believed that men who repented of their crimes deserved help. An enlightened reformer, she brought their plight to the attention of the American public, campaigning against corporal punishment, prolonged solitary confinement, and other abuses in the prison system.

While it served those in need, Volunteers of America consciously engaged the wealthy and powerful in its mission. Ballington Booth's personal address book was filled with names from the business, political, and social elite: Theodore Roosevelt, William Jennings Bryan, Bernard Baruch, John D. Rockefeller, and John Wanamaker, to name a few. Influential friends were organized in national and local societies called Defender's Leagues. Private giving from these supporters was the main source of funds in this era before government support of human services.

The Volunteers of America story is intimately linked to American life in the 20th century, especially in times of national crisis. During the two World Wars, the organization served "on the home front," operating canteens for soldiers and sailors on leave, providing low-cost housing for defense plant workers, and collecting thousands of tons of scrap metal, rubber, and fiber in huge nationwide salvage drives.

The Great Depression of the 1930s strained America's private charity system to the breaking point. Volunteers of America organized soup kitchens and "penny pantries," where no food item cost more than a cent. By 1936, the organization had provided some 25 million meals, 3.8 million nights' lodging, and 1.7 million articles of clothing—all free. Jobs were found for 417,000 of the nation's unemployed.

One Hundred and Twenty Years Later

Today's Volunteers of America staff, like those who preceded them, come from all walks of life. They are blue-collar workers and executives, housewives and professionals, college students and retirees. Some are clergy, many are lay people. Protestants, Catholics, and Jews work side by side, united by the belief that they can be God's servants in making a better world.

Like many nonprofits, Volunteers of America entered into a close working partnership with the government beginning in the 1960s with the Great Society programs of Lyndon Johnson and expanding in the 1970s and 1980s with the privatization of social services under presidents Richard Nixon and Ronald Reagan. The organization grew rapidly, serving ever-larger numbers of people.

Growth brought major internal changes as well. In the early 1980s, Volunteers of America abandoned the military model of organization, along with rank and uniforms. Meanwhile, it strengthened the leadership role of local volunteer boards of directors in planning community services.