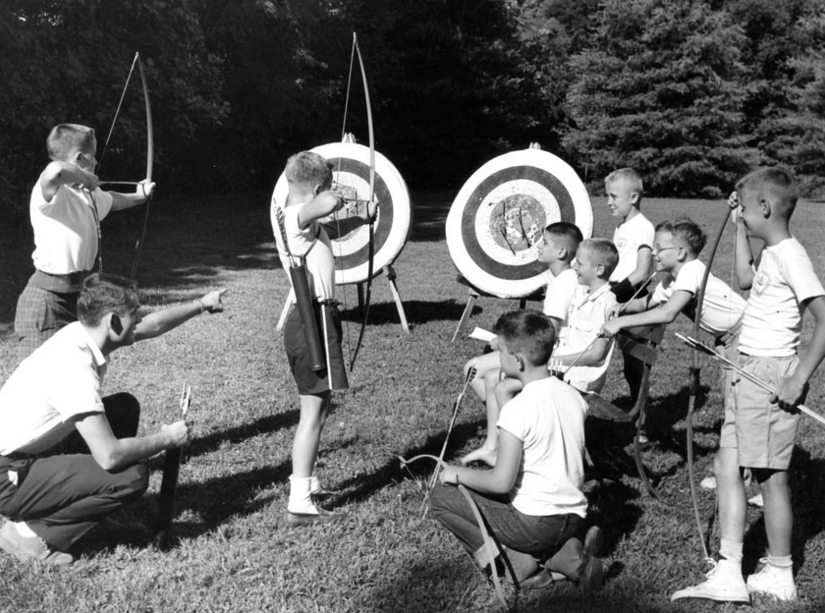 When I was a kid in the late 50s, early 60s, I attended summer camp in Maine. The camp is no longer there. The camp directors were from Trenton, NJ.
I really enjoyed my childhood summers at this camp. Especially when we went around the state, mostly along the coast, collecting money for Volunteers of America (we called it tagging as we gave out a small price tag with Volunteers of America stamped on it so we wouldn't ask them again to donate). This camp was in Pine Point near Old Orchard Beach.

As for tagging, one of the camp leaders and other adults would accompany several of us kids as we went along the coast collecting donations for the camp. We would have cardboard cans with a slot on top for the donors to put their money in. The cans had a picture of the camp along with the words Volunteers of America. We would ask people if they would like to donate. If they did we would give them a small price tag with a string that was stamped with our Volunteers of America name (almost like the American Legion with their lapel flowers). They could tie it on a shirt button or something so that if we saw them again we would not ask them again to donate. Some of the them would donate a second time anyhow. We would stand outside of businesses, with their permission of course, and usually just stood by the door shaking the cans. I didn't really like actually asking people to donate as they had other things on their minds. every so often thee leaders would check on us to see how we were doing and go exchange cans. I can remember tagging in York Beach, Kennebunk, Portland, Boothbay Harbor, Bar Harbor, and Rockland. I know we did a few other places but these were more memorable. Our best week was when most of these towns had "Founder's Day," 'Old Time Days," and other days celebrating their settling and other occasions.

We also enjoyed going berry picking in the woods just down the side road from the camp. talk about fresh blueberry pies!!

The camp managers came up from every Trenton NJ every summer to run the camp.