Classic country music at home on the grange 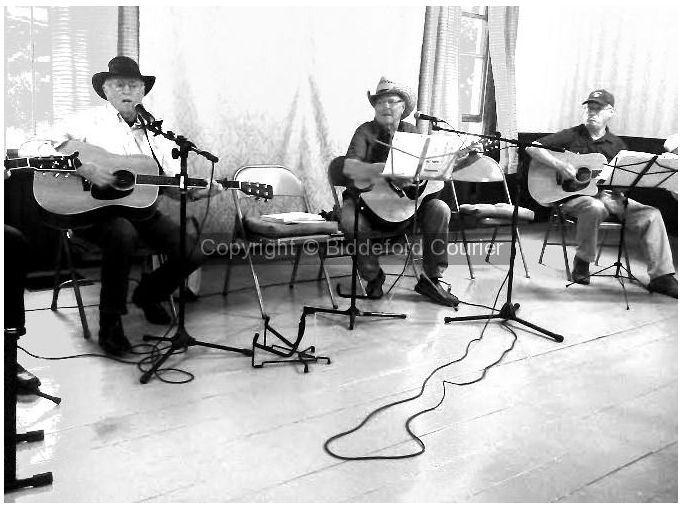 From left to right, Guy Thivierge, Al Murray and John Braley play country music together at a monthly acoustic country jam, held on the first Friday of each month at Saco Grange 53 at 168 North St. (Ben Meiklejohn photo)

SACO – A monthly country jam at Saco Grange 53 has attracted the interest of country music aficionados, both players and listeners, for more than a year.

Assistant stewart at the grange, Sandy Leeman, who organizes the jams on first Fridays, said a loyal following of musicians and fans gathers every month to enjoy performances of traditional country songs in a music-in-the-round format. Singers take turns playing a song of their choice and others may join in if they know the tune.

Leeman, who grew up in Saco and lives in Waterboro, said her mother, who is 80, has been a lifelong grange member.

"(The jam) brings back the old country songs. I just sit here and watch my mom sing along the songs," Leeman said.

Saco resident Jerry Sanders, who moved to Maine from Nashville last year, said the grange's country jams are his favorite place to play country in the region.

Sanders said he lived outside of Nashville in a town called White's Creek and played in a country band of the same name. The town is known for having been a hideout for the brothers Frank and Jesse James, Sanders said.

"Here, I can play real country and play along," he said of the jams.

Sanders said Leeman keeps the jams wellorganized and a level of musicianship is required to get a seat in the session.

Leeman said, "No jokes and no electric guitars – except for the bass. People take turns and can join in if they want. Everybody does their thing."

Leeman said the jams represent one way in which the grange is finding new ways to get people in the community involved. The grange has been attracting younger members and craftsmakers to diversify the group from its mainly agricultural focus of the past.

The grange has 37 members, about half of which are actively involved, she added.

In the past two years, the group has made improvements to the building, including new electrical work, plumbing, a renovation of the grand hall and a new roof.

Leeman said the electrical work was paid for with a $2,500 grant from the Belvedere Historic Grant Fund of the Maine Community Foundation, all of which went to supplies; electricians donated their services.

Since improving the building, Leeman said the group has been renting out the 100-capacity venue, including holding concerts and craftsmakers fairs.

Leeman said even though the grange is historically an agricultural organization, it makes sense to organize around craftsmaking because there are already other outlets for agricultural interests.

In the meantime, Leeman said she hopes some of the arts and crafts offerings, including the country jams, will help bring in new interest in the grange, which has been organizing activities in the Saco and Biddeford area since 1874.

Membership is $30 for the first year and $25 each year thereafter.