This is Why We Do What We Do

Miracle Moments in our Veterans Services

Miracle moments happen everyday in Volunteers of America's programs. Sometimes they are subtle, like the conversations that happen during a community meal; and sometimes the grace of simple human kindness intervenes when we least expect it and the world gets a little brighter. 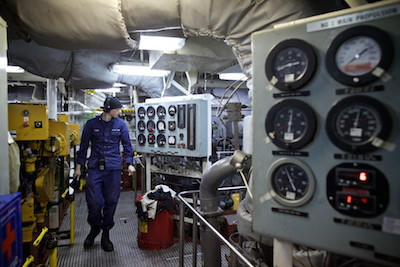 "Gary" (not his real name) had been in the Coast Guard for thirteen years where he trained and worked as an electrician. The work was satisfying and engaging until his supervisors began to ask him to do "unsafe" work. Not wanting to disobey orders, he did what he could to get the jobs done as safely as possible, but the requests kept coming. Finally, afraid for his safety and the safety of others, he blew the whistle. His clearance was pulled, he was demoted and in the end, thankfully, he was honorably discharged.

Upon returning home, he found work, met a wonderful woman, bought a house and was living a life that made him proud and happy.

Until he started drinking.

In a very short time, Gary got into trouble, lost his job, lost his partner, lost their house and was living in a homeless shelter in Southern Maine when Volunteers of America Veterans Services case managers Ken Darby and Brian Buothot met up with him last year.

Buothot works at Veterans' Career House in Biddeford; and Darby, a veteran himself, is at Arthur B. Huot Veteran Housing in Saco. Once a month, they visit homeless shelters in Southern Maine. They go to chat with other vets, to help out if they can, and to let folks know about Volunteers of America's programs as well as other services available for veterans.

They also go to job fairs and career centers, gathering and sharing resources. 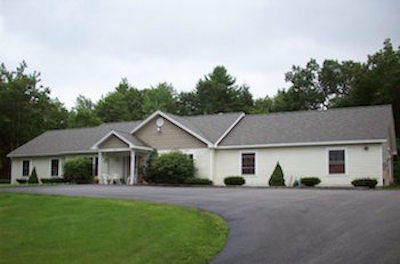 When they met Gary last year, he was in a bad way. They encouraged him to visit the Veterans Career House, and he made the life-changing decision to apply to live there.

To everyone's surprise, Gary's life was not the only life that was changed. Case manager Buothot says, "Before Gary came to live here, things were…well, let's just say, on a bad day, if we had eight tickets to a ball game we would be in eight different cars to get there." After Gary moved in and quit drinking, he really fostered a new sense of fellowship among the Veterans Career House residents. "It was like we returned to community living in the best sense of the word," Buothot said.

Gary jumps in to help out when he can, he's there with a kind word. He has really made the place a home for himself, and for everyone there.

House dynamics shift as new clients move in, and those who have reached their goals transition out. There is a settling in period for everyone. But clear rules help maintain order. The first rule is: veterans are allowed a maximum stay of 20 months, and there is often much to be accomplished in that time. Buothot stresses, "We do not allow Veterans to drink or use illegal substances. They can stay here and get the supportive services they need while getting sober, but it's not just an in-and-out process. We like to find and address the root of individuals' problems, so that when veterans leave our program they can build on the progress they have made."

Veterans also need to pursue employment or receive services that lead to employment. And they help out with volunteer activities, like delivering hay bales for this year's Halloween events in downtown Saco, and setting up barriers for the Heart of Biddeford Veterans Day parade. This year, Gary celebrated one year of sobriety on Halloween so it was an especially big day for him, and for all of us. 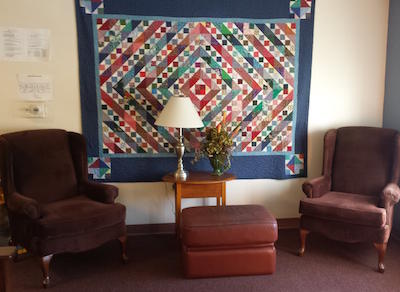 Maine's only co-ed Veterans Housing program, Alfred B. Huot House has ten efficiency apartments. It is currently occupied by three women and seven men. While the goal of the program is to find long term permanent housing, veterans have twenty months to get their lives and their health stabilized. Employment or employment prospects are not required for residents at the Huot House, but sobriety and respect are. Manager Ken Darby told us that he had a visit from a 92 year old alumnus of the program who moved out 4 years ago and is as busy and involved as a person half his age.

"We have a broad range of clients here," says Darby, "from WWI vets, to veterans who had to leave the military because they could not handle the rigorous demands of service after only a few months, to career vets whose transition into civilian life proved difficult and challenging."

Among the successes of Huot House Residents, here is an update on current clients: Sara is employed. In fact, she has two jobs: working at the Maine Diner gift shop in Wells and working as a direct care professional at Truslow Adult Day Care. Becky, who had been stationed at Yokosuka, Japan and was recently discharged from the U.S.Navy, came to Huot House in July. Her goal is to finish her B.A. in English utilizing Vocational Rehabilitation funding and then return to Japan to teach English.

Murray, who has made progress on many fronts, including investing much of his time to help a Biddeford family and their 11 year old son, has moved to Paul Hazelton House, our affordable senior housing program in Saco. Three other veterans hold subsidized housing vouchers and are in the hunt for apartments.

Huot House residents and staff are an integral part of the Biddeford community, volunteering at events, collaborating with other other non-profit organizations and working closely with their advisory council to raise awareness and gather resources for veterans in southern Maine. Ideally located near to services, the two programs often use the Saco Community based health clinic for basic, routine checkups and minor health issues, leaving the journey to Togus Veterans Hospital for serious health concerns and surgeries.

Support lives on long after clients leave our programs.

Program Manager Mike Merrill recently received an email from a vet who was discharged from our Veterans Services Program two years ago for continued alcohol use at the facility. "Though he understood why he was being discharged, he wasn't happy at the time, to say the least." Merrill explains, "Yet, in his email he thanked me for believing in him and thanked the staff and VOA for having given him a safe place to live, and loving him, and for all of us holding him accountable for his actions."

Merrill continued, "Now he is engaged, living downeast with his fiancé, and has been sober two years because of the support, love, safety, and honesty he received from our program." Veterans come to our services in dire need and often leave with the desire to help others.

Community and individual support is key to the success of these programs. 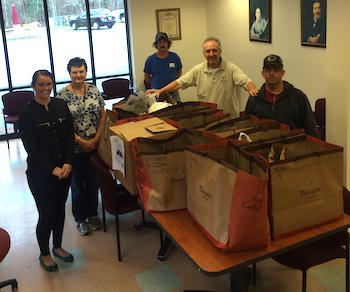 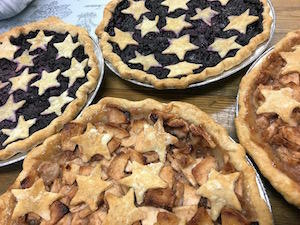 In honor of those who have served, Saco Biddeford Savings Bank's Don Lauzier and his team, as well as Pam Payeur and her husband gave an "amazing" (by all counts) dinner for the veterans and staff of Volunteers of America's Veterans Services the day before Veterans Day in honor of those who have served, complete with Star Spangled Pies. A couple of days later, bags and boxes of food donations arrived from Logisticare and Graftech/FMI in Biddeford.

When asked about Veterans Services partners, Merrill had a list of more than fifty organizations, businesses, and clubs, along with more than a hundred volunteers and donors who have answered the call to join us in serving the men and women who have served our country. Please consider a donation to continue these vital programs. For more information, contact 207-571-3359