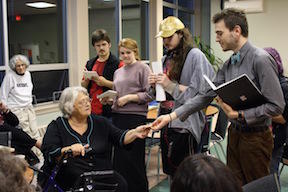 “Once in a while an idea pops up in your in­box that turns out to be the best thing you did all year!” says Sandra Pedersen, program manager at Volunteers of America’s Bayview Heights affordable senior housing community in Portland, Maine.

Sandra partnered with Adriane Herman, an associate professor of printmaking at Maine College of Art (MECA) in Portland, to create a community art project at Bayview that would help the art students and the senior residents engage in the community around them while enriching the building with original art. Adriane titled the class “Gathering Influences: Collecting, Collections, Collectors, Collectibles.”

“The idea came from my own art practice,” explains Adriane. “I work a lot with notions of how and why we collect things in our lives. Also, I had a show in 2011 in Kansas City in a museum that shares a building with a retirement community. I had some wonderful conversations with these older people. It was a profound experience for me to have this sort of engaged audience in the community.”

Sandra says she was excited about the opportunity, because activities like this help to increase the interaction and social exchanges between young adults and older adults. “It’s an opportunity to share stories and knowledge,” she explains, “strengthening emotional ties to the community, encouraging engagement, and helping to dispel potentially negative stereotypes.”

Bayview resident and Maine native Jannie MacDonald says, “I was interested in this program, because I love art and studied it at school.” 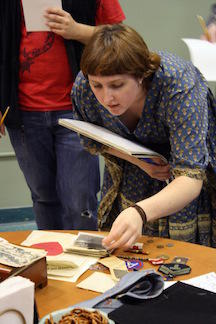 Starting last September, Adriane, her teaching assistant Pilar Nadal and 11 young MECA students began meeting with some 15 Bayview seniors in the facility’s community room on the theme of collectibles — What do we collect in our lives (coins, scarves, memories)? And what do these collectibles mean to us?

The students introduced themselves to the seniors through a form of show­and­tell, using individual magazine­style, accordion­fold pamphlets portraying the objects and interests they themselves had been collecting. “We learned that one of the students ran his own business making bow ties, for example,” says Sandra. “Others collected scarves or passports — or even scars on his skin!”

“As you can see,” says Adriane, “what we collect reflects not just objects but the accretion of memory and experience in our lives.” Each resident received a set of these student 'zines.

“Some of us were wondering what kind of wild purple­haired kids might be showing up,” Sandra says with a smile. “But in fact we made real connections right away — the residents and students spent more time learning about each other over coffee and were never in a hurry to leave.”

Jannie agrees. “The kids were wonderful. One young man loved duct tape, and he wore it on his feet, on his hat — and I thought, ‘This is the new generation!’ One girl had red hair down the middle and yellow hair someplace else, with really a lot of makeup. But they were sensitive and caring, as unself­conscious with us as we were unself­conscious with them.”

Students get a view of residents’ world

On the second visit, the residents offered their own show­-and­-tell of objects they’d collected over the years and that were important to them. The students took notes and photographs and were encouraged to respond to one or more of these collections by working with the residents one on one and talking with them in more detail.

“I showed them a chest of my father’s memorabilia from World War II,” says Jannie. “Things like dog tags and photos of the soldiers, tanks, and bombed­out cities. At first they kind of just looked — and I said, ‘This was World War II.’” She also told the students about her earlier career at Porteous, the famous Portland department store, now defunct, whose large, handsome building in the heart of the city is currently occupied by MECA. “I told them about hidden elevators, my work in the office and various sales departments — Cosmetics was my favorite because we got a commission! — and how I met my husband­-to­-be there,” she says. 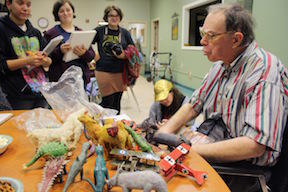 Another resident, Irvin Kelley, revealed to the group that he is an expert model builder using scraps of cardboard, paper, glue, and paint to masterfully create model biplanes, dinosaurs, and various dioramas. “Having the students from MECA here was an opportunity for Irvin to share his artistic talents with others,” says Sandra. “His models were so well made that some of us thought he had storebought ones mixed in with the ones he made!” The group learned that Irvin is also a science fiction enthusiast, comic book collector, and guitar player.

“For the students,” says Adriane, “it was almost as if we’d developed a retinue of surrogate grandparents. One of the things that was really striking was that it was difficult to pull the students and residents away from each other!”

The power of collaboration

“My hope for the class,” says Adriane, “was that the students would get an expanded sense of who their audience is — and, working together, we achieved that. The residents were a truly thoughtful audience and group of collaborators. It’s very edifying for an artist to have dialogue with an audience that’s invested in your work: How often do artists get that? The residents were genuinely eager to see what the students had done.”

“Also, the residents were impressed with, among other things, how hard the students worked,” says Sandra. “Their art projects clearly took a lot of time, careful thought, trial efforts, technically demanding print processes, and so forth. And many had one or more part­time jobs in addition to a full class load and a mix of other responsibilities.”

Bayview resident and Maine native Diana Grindle adds, “It was nice to have young people here with fresh ideas — not just somebody coming in and talking. Diana partnered with a young artist who was intrigued by her collection of coins and paper money from around the world. “When we were done,” she says, “I gave him one of my coins.”

Residents are touched by students’ work

By the time of the fourth visit, the students had created editions of their prints in sufficient numbers to give each other complete portfolios of everyone’s work, to donate a framed print to Bayview for public display, and to give “their” resident an unframed print as a gift.

“The finished prints were wonderful and very different,” says Sandra. “The residents were truly impressed and delighted, and honored to have their own stories (and collectibles) reinterpreted so generously and with so much heart.” Jannie say, “One of the students I worked with made a beautiful image of a heart inscribed with the words ‘For you, daughter,’ as if it were a message from my father. Another student created an image of a vest with medals for me. Very creative and sensitive,”

Jannie adds that she was impressed with the students. “They were dedicated and compassionate!” The others residents, too, reported that they found it inspiring and motivating to spend time with the students. “They were engaged and socially empowered by the experience,” says Sandra. “And the students were positive role models — not to mention generous about including the residents in the creative process. It was a chance to forget about your everyday responsibilities, get out of the apartment, meet new people, and enjoy sharing a laugh. In the end, I think we all saw each other in a new light — which is good for everyone!”

Both the Dean, Ian Anderson, and President, Don Tuski, of MECA, were so impressed with Adriane’s community art project, that they attended the final class presentation at Bayview. Don suggested the project become a model for future MECA outreach courses.”

“This program really helped stoke the fire of my belief in art’s capacity to connect people. Many of the residents commented that they stayed downstairs in the building in the evenings much longer than usual and that this class caused a lot of activity in the building’s common areas,” says Adriane.

A rich experience for Bayview residents

Today, the 11 framed MECA artworks are hanging in the hallways and other public spaces at Bayview Heights. “We couldn’t wait for the students to come back,” says Jannie, “and I think they felt the same way.” Sandra says that she believes the program helped raise awareness that older adults are still a valuable asset and have much to offer.

“From our point of view at Volunteers of America,” Sandra says, “involving the community helps to create new resources and added support for the clients we serve. It can also lead to new community collaborations and a richer experience for donors and volunteers — while creating a more positive and active living experience for our residents. I hope we can do something like it again. After all, it's why we do what we do!”

To learn more about Bayview Heights and Volunteers of America’s other affordable senior housing communities — and how you can help — please call 207-­373-­1140 or email us at help@voanne.org.