Action Teams At It Again 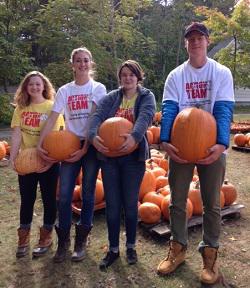 In December, The Brunswick High School Action Team and School Chorus will provide a holiday celebration for residents of Margaret Chase  Smith House on Wednesday, December 2, from 3-5 . Then, on the following Wednesday, December 9 , they will be doing the same at Bayview.

The Action Teams are a partnership with Volunteers of America and the Major League Baseball Players Association. Along with Action Team sponsorships and visits to Fenway Park, the Association provides several $2000 scholarships each year.

On Sunday, October 18, 32 members of the Brunswick High School Action Team, with Rita Maines and friends, hopped aboard the Peaks Island ferry carrying rakes, shovels, loppers, a broom and pitchfork. A police officer (in a golf cart) was waiting as the ferry docked. Apparently the word had gotten out: Teenage Invaders are Coming! We quickly assured nervous Islanders that our intentions were peaceful – unless you were a weed, a leaf or creeping vine. After a quick muster at Fay Garman House, the Action Team engaged in a three pronged attack: Group 1 left for the Peaks Island Elementary School. There, they cleaned and filled ten bags with yard trash, including vines that had winded around the surrounding 8 ft. fence. Group 2 went next door to help clean the neighborhood Day Care. And Group 3 cleaned around the grounds of Fay Garman House. Great work was accomplished. The entire gang gathered at the school to wrap up the cleaning. Then they made their way back to Fay Garman House using trails known only to locals, led by a circus boy who had entertained everyone with leaps off tables, fences, and other launching pads. A lunch buffet was served at Fay Garman House. The team left on the afternoon ferry. And Peaks Islanders were left to ponder: who were those clean teens and why can’t they stay?

On Tuesday October 20, the Brunswick Action Team came to our senior housing program in Topsham, the Westrum House, for an afternoon of fun with residents. Refreshments were served, students competed with seniors on Wii bowling (and, as usual, the senior were victorious) and everyone sat down to transform pumpkins into festive works of art. This is second year the Action Team has painted pumpkins with seniors. This kicks off another year of intergenerational gatherings between caring teenagers and women and men in their 70’s, 80’s and 90’s. Last year, there were four such events at Westrum House and it is always very gratifying to create these opportunities. The teens are often surprised by the liveliness and fun loving attitudes of seniors and the seniors are often surprised that the kids feel comfortable with them. These events do much to break down stereotypes and demonstrate that people of all ages have much in common.

We are grateful to the organizers of the Pumpkin Patch program at Mid-Coast Presbyterian Church in Topsham who invited the Action Team to help unload pumpkins from a truck that delivered them from New Mexico (The Pumpkin Patch program supports Native American communities). We were able to purchase 55 pumpkins (worth $5 apiece) for $1 each. Pumpkins were provided to the Action Teams in Brunswick and Poland. The Poland Team will be engaging veterans in a similar pumpkin painting event in early November.

Here's a great video of work the Action Team did on Peak's Island at the Fay Garmen House and the Peak's Island Elementary School a couple weeks ago.