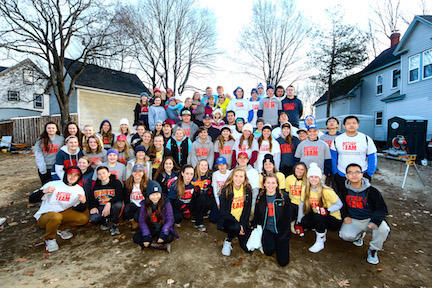 November 14, 2015 , Brunswick, Maine – On November 14, 50 high school students got out of bed at five o'clock Saturday morning…..WAIT – there's more! Action Team members from Brunswick High School , York High School and Thornton Academy (Saco) boarded a bus and traveled to Rochester, New Hampshire (where they joined up with a team from Attleboro (MA.) High School) to help build a house for a veteran and his family (wife and four children). When they arrived, not much more than a foundation was visible. By the time they left, six walls were in place. A neighborhood transformation was underway and the Action Teams were pleased to be part of it.

The Action Team national youth program was created and is administered by the Major League Baseball Players Trust and Volunteers of America. Students have an opportunity to learn about the joy of volunteering. On this day, they were able to make a difference while working alongside three major league baseball players from New England: Matt Barnes (with the Red Sox), Chris Iannetta (most recently w/ the Los Angeles Angels) and Ryan O' Rourke (with the Minnesota Twins). 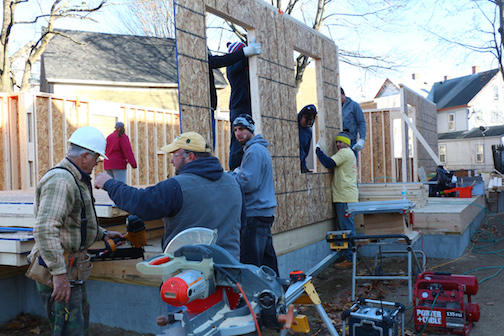 These professional baseball players did much more than sign autographs; they came to work. They provided most of the muscle in lifting and setting in place prefab wall sections. They swing hammers with the students; they helped dig in and around the foundation. Most importantly, they shared their stories with the students, making clear their belief in the value of giving back to the community. 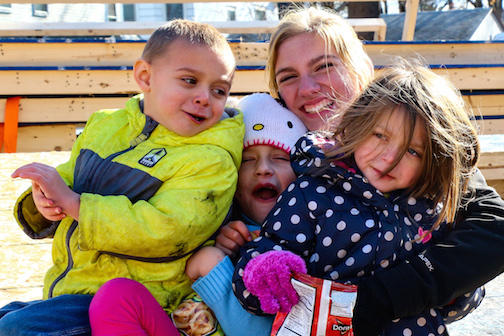 During the day, the family (mother and four kids) were on site. It was especially gratifying to the volunteers to have the family present and to see their excitement about the house they will move into next year. Action Team members and some of the ball players enjoyed playing with the children as a buzz of activity swirled around them.

While a team from Habitat for Humanity showed the students and ball players what needed to be done, Volunteers of America's Tanisha Smith, VP of Marketing, kept everyone fed and Action Team National Coordinator Lyman Smith kept everyone engaged. Those not holding a hammer or a lugging a board were gathered in a circle, moving, staying warm on a cold day, ready to toss a stuffed animal as a part of an icebreaker, getting kids to learn about each other. 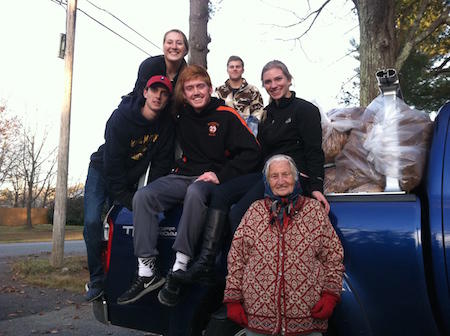 But they didn't stop at home construction. A couple of days later, the Action Team was back at work helping with Brunswick's fall cleanup. They had help from Johanna, a Brunswick resident, who was born in the Czech Republic and married a US Veteran during WWII. They made their home in the United States. Johanna is 95 and helped with the fall clean up by doing some raking and holding bags for the teen.

These days were about helping others and having fun – two things that are definitely connected when someone is a member of the Action Teams. Volunteers of America and Major League Baseball Players Trust bring together diverse people in attaining a common goal. By providing young people the opportunity to be kind and giving, Action Teams create more confident adults who are willing and able to try new things, to roll up their sleeves, and make the world a better place.