Life's Best Prize: Helping Veterans Get Back to Work

Two centuries ago, Thomas Jefferson said, “Far and away the best prize that life offers is the chance to work hard at work worth doing.”

He was right.  But finding good work is harder than ever — and harder than it should be — for some of today’s returning U.S. veterans. 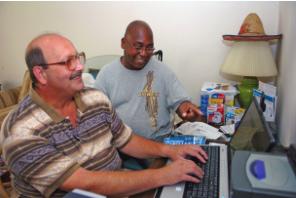 Challenges old and new
“Modern vets face a range of challenges, including some that are new or more intense than those of previous generations,” says Michael Merrill, Veterans’ Services Program Manager for Volunteers of America’s two residential facilities for veterans in Saco and Biddeford, Maine. “They’re often less educated than the general population and at greater risk for post-traumatic stress disorder [PTSD], brain injury, substance abuse, and other long-term challenges.” As a result, Michael says, they face higher hurdles in the first place when trying to secure a job.

"On top of that,” he says, “veterans’ deployments have grown so lengthy in some cases that employers can’t — or simply don’t — hold existing jobs open, which means that even vets who had a job when they left home sometimes don’t have one when they get back.”

Homeless back home in Maine
Melissa Morrill, Vice President of Veterans and Senior Services for Volunteers of America, adds, “In terms of veterans’ employment, Maine has been hard hit. Our job market just isn’t that great. Much of it’s rural. And a lot of our jobs are hands-on or manual, which sometimes doesn’t pay enough for a veteran with, say, a family.”

In addition, she explains that Volunteers of America works with veterans who are already bearing the burden of homelessness — the low end of a downward spiral often reached by way of unemployment, PTSD, other mental and physical health problems, and the general stress of reintegration. “To help these men and women,” she says, “we use an evidence-based approach based on individual case management, assessing people to see what they need — counseling, treatment, and referrals — to help them put their lives back together as far as possible and get a job.”

The long road back
“We work with each vet in detail,” says Michael, “both in-house and by helping them connect with resources in the community, such as local veterans’ career centers and mainstream career centers. We also work with case managers at VA offices and benefit from their networking knowledge. Our goal is to see veterans re-envision their military skills as genuine on-the-job skills and resume strengths. Even something as specific as driving a combat tank can rightly be seen as depending on real talents, leadership, clear thinking under pressure, multi-tasking, effectiveness in a crisis, and so forth.”

Michael adds that his team has had a pretty good success rate so far. “Our Veterans Career House in Biddeford helps vets move from transitional to permanent housing, for which you have to have, or be actively seeking, employment,” he says. “The House has seven men in residence just now. Four of them are employed.”

Community support matters, too
“Today, veterans’ issues are recognized more broadly by the government, businesses, and the public than they used to be,” says Melissa. “The federal government, for example, now offers employers tax breaks to give them incentives to hire more veterans. And businesses in the community recognize that hiring a vet can be the right thing to do.”

A case in point: North East Mobile Health Services of Scarborough, Maine, launched its Hiring Heroes program on Veterans’ Day. The program promotes company job openings through various veterans’ service organizations in the region and aims to do the same for their basic EMT training class. “We already have more than 20 vets working for us — and we’re very happy about it,” says Polly Miller, North East’s Vice President for Business Development. “They’re hard workers — dedicated, talented, and reliable.” The company is one of New England’s largest providers of medical transportation services; it serves southern Maine.

Out in the country?
Volunteers of America is also active in areas that are farther afield. “Rural areas,” says Michael, “are especially tough, because vets who go home to the countryside are often literally far away from services, resources, and jobs. But in fact the entire state of Maine is our outreach area. If we hear of a homeless veteran in, say, Aroostook County, we’ll set up an interview and — thanks to funding through our grant per diem programs — get together a package to help outfit them as well as we can, such as a tent, hygiene products, and medical services.”

The land of the free
What does Michael think at the end of a long, hard day? “I think America is the land of the free because of the brave,” he says with a smile. “That’s why I’d encourage people to visit us here, to check out our programs, and even if you can’t donate money, donate your time and your heart and your gratitude. We’ll train you!”